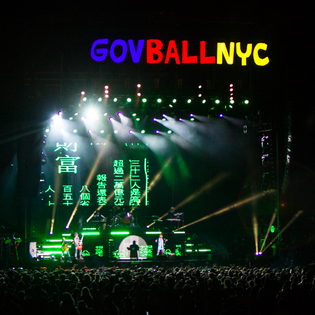 New York City had its second wettest day in June ever last Friday, the first day of Governors Ball. For almost 24 hours, Tropical Storm Andrea lingered over Randall’s Island and decimated the grounds. Where once there were acres of grass that made up a driving range and what seemed to be prime real estate for some games of Ultimate Frisbee now was an acrid mud field. By the end of the festival, Snoop Lion had more grass than Randall’s Island. And for reference, Lollapalooza paid $350,000 to repair Grant Park after a 45-minute rain storm came through the grounds last year, and having been to both, the damage to Randall’s Island is far worse and widespread. Ecologically speaking, it was a total disaster.

Which is to say, for otherwise amazing lineups and logistics, Governors Ball got dealt a shitty hand. By the end of Friday, just before Kings of Leon were supposed to headline, there were maybe 70 stalwart Leonites pruning at the stage in the rain. Saturday’s grounds conditions were a giant sty, with a pastoral miasma hovering over everything. Trudging from one end of the fest in the ankle-deep mud was kind of “lol mud!” in the beginning and “goddammit, seriously?” by the end. By Sunday, things were markedly improved, though whiffs of farm could still be smelt here and there. “You know that occasional crap smell?” Grizzly Bear bassist Chris Taylor said mid-set. “If you smell that, just lean over and smell your neighbors neck. Don’t let the vibe die.”

Taylor and Kendrick Lamar had it figured out. Though Gov Ball NYC 2013 will go down as the year we all got an alert on our phone that said we were under a flash flood warning, there was always something musical to Vine home about, starting with Kanye West premiering five new songs. You’ll remember the rain, but for the music books, we put together the best 30 moments from three days of Axl, Kanye, the Brothers Followill, and Lubriderm-flavored vodka