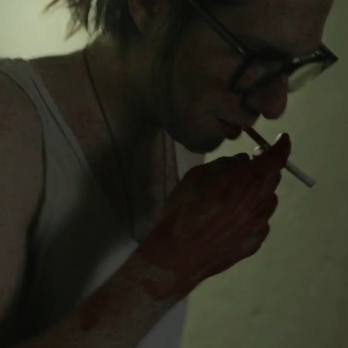 Back in April, Chicago’s darkly post-punk pair Gauntlet Hair revealed plans to follow up their 2011 self-titled debut with Stills (July 16th via Dead Oceans). Indicating that the album was the result of the duo returning to past favorites for inspiration, they revealed “Human Nature” as a The-Jesus-and-the-Mary-Chain-influenced preview.

In the new video for the track, drummer Craig Nice and singer and guitarist Andy R. illustrate just how dark their human nature can be. The Ryan Ohm-directed clip sees the duo run amok all over their adopted hometown of Chicago, drinking under trains and partying with half-naked cuties. But then, between scenes of them running through subways and huffing ether, they share a knowing smile, like there’s some dirty secret they’re only telling in the space between moments. And whoa, wait, what the heck is that on their hands? Click play below, and see if you can’t cut through the tension.

The band will also be on tour in support of the record this summer. Consult their full schedule below.