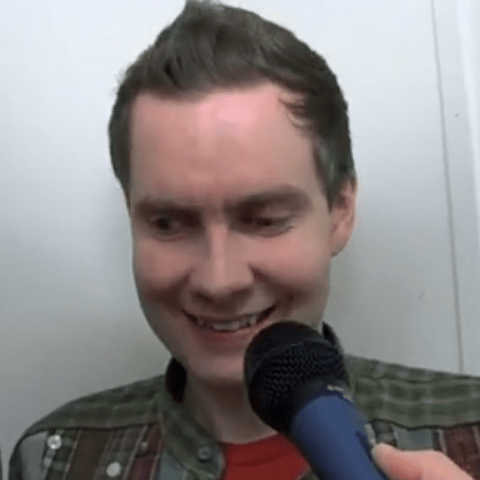 Sigur Rós are notoriously bad at interviews. Even NPR says so, deeming their time with the band as “possibly the worst interview in the history of electronic media.” But if anyone could get the Icelandic post-rockers to string together more than three words to answer a question, surely it’d be Nardwuar the Human Serviette. He’s gone toe to toe with Henry Rollins, so what threat could Jónsi possibly pose?

Earlier this month, Nardwuar got his chance to speak to Jónsi, Georg, and Orri prior to their performance at Deer Lake Park in Burnaby, British Columbia. Among the highlights:

Nardwuar: Will your new LP be released on picture disc and cassette?

Nardwaur: What can you tell the people about Thor’s Hammer?

Nardwaur: Why was beer banned [in Iceland] until 1984?

Nardwaur: Is there any reason behind that?

Nardwaur: We have time, please explain.

Nardwaur: Why no TV on Thursdays [in Iceland]?

Jónsi: It’s kind of a good idea though, I think

Riveting stuff for sure, but wait till you see what happens when Nardwuar asks them about the penis museum in Iceland. (Spoiler: Nothing actually happens.)