Watch The Postal Service on The Colbert Report 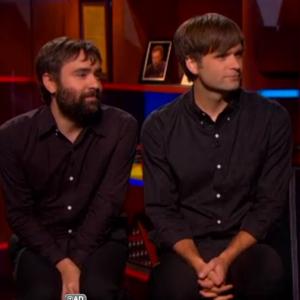 It’s been a great year for The Postal Service. They went platinum, collaborated with Funny or Die, basically headlined Coachella and Sasquatch!, strung together the finest reissue in years, sold out Brooklyn’s Barclays Center, dropped one of this year’s most iconic videos, and last night, they finally made their proper late night television debut on The Colbert Report. (Granted, it took them 10 years to manage all of these feats, but hey, file it under “better late than never.”)

“Collectively, you guys are you’re known as The Postal Service, and you put out an album 10 years ago, called Give Up,” Stephen Colbert paused before adding, “A title I guess you took too seriously, because you never put out another album.” Ben Gibbard, Jimmy Tamborello, and Jenny Lewis kept things relatively simple, discussing the album’s now legendary creation process and the reunion thus far, before they performed a flawless rendition of “Such Great Heights” and “A Tattered Line of String”, one of two new songs included on the reissue. Watch it all below.

“A Tattered Line of String”:

The first leg of the tour wrapped up on Tuesday night in Columbia, MD, but have no fear, they’ll return to the road in July. Act accordingly.