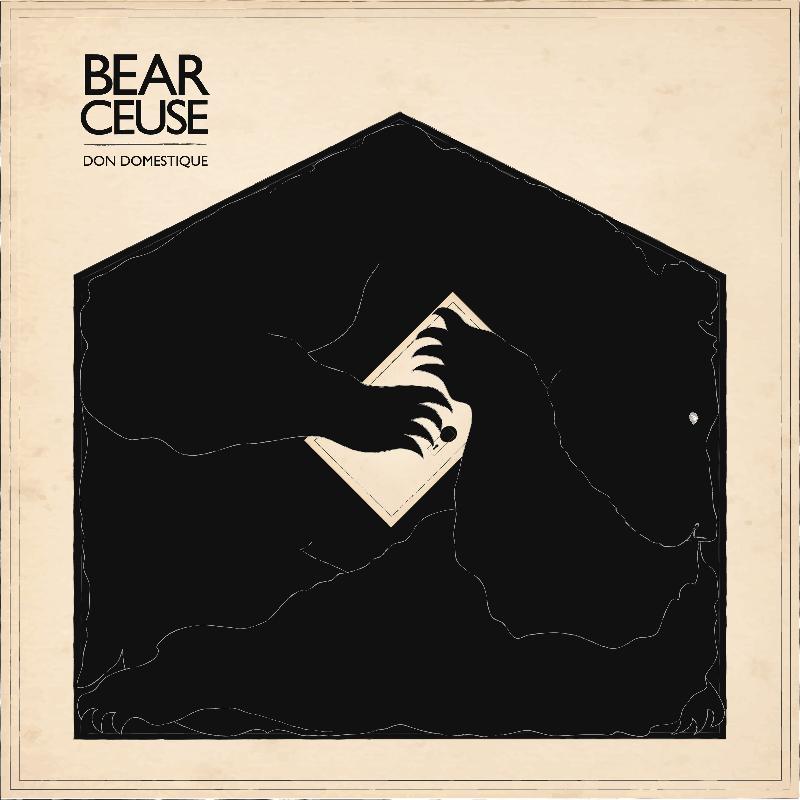 New York four-piece Bear Ceuse seem like the kind of guys that were and likely still are really into mixtapes. I’m not talking about CD-Rs here, either. These heady college rock influences have at least one foot firmly planted in the ’90s and the accompanying magnetic tape. The quartet’s new album Don Domestique runs the gamut from hardcore snarl to sparkly swoon, echoing Dinosaur Jr., Pavement, Sonic Youth, and everything in between. Bands mining the ’90s for inspiration (or, at worst, something to rip off) aren’t exactly rare, but few bands can cover so much territory so deftly while delivering a unique voice strong enough to carry the different sounds scattered across both sides of the tape.

Bear Ceuse’s ability to unite seemingly disparate sounds comes from their multifaceted musical past. Frontman Cameron Matthews and guitarist Adam Horne have both worked as music journalists. Drummer Danny Sher has spent some time kicking around in jazz outfits. And the horn flourishes on opening track “My Friends”? Bassist Jordan James also happens to be a Juilliard-trained French horn player. The knowledge and technique amassed among the four musicians inform the precision on display here, but rarely to the point that the skill overpowers the moment.

Album opener “My Friends” sounds a bit like Broken Social Scene covering the Smashing Pumpkins: chunky bass, nostalgic lyrics, and a ripsaw guitar solo, all softened by wispy vocals, piano stomp, and French horn curls. The slinky riffs and breathy, melancholy vocals of “Dixie Brothers” come from the Ryan Adams school, though the hardcore backing vocals and clanging leads rough things up considerably. Throughout Don Domestique, Matthews and Co. pick pieces out of different puzzles and manage to fit them together as if they were meant for the same box.

The album’s lowest point is decidedly “Streets of Something Good”, a song that stares directly at the sun that is Radiohead’s early balladry. While Matthews indulges a soft-spoken falsetto elsewhere, its repeated rise and fall here starts to inspire an ice cream headache. The arrangement is immaculate, the harmonies beautiful, but the song never deviates from the statements made in the first 30 seconds. That said, Matthews’ romantic bent fits the song perfectly, his narration aching with the hope that a lost love will find a way. “Creaking ’round cobblestones/ My knees keep shaking to their bones,” he coos, the pain cracking his voice out of its careful maneuvering.

The embrace of life’s pain is a major component of the glue that holds the album together. Mid-album highlight “I Saw It Beating” momentarily opens up a paranoid vein as questions of distance and desire waft away. The strumming acoustic guitar and pounding percussion of “God’s Looking Down” gives the reins over to existential frustration (“I never look up/ Cause God’s always looking down”) and “This or That” struggles to come up with a reason for our base nature, the coy wordplay dipping a toe into Malkmus’ pool. “Heavy in the bourbon/ Found God in the early ’80s/ Spat voodoo in his sloe gin,” Matthews crows on “OK LE OMA”, his views on belief, family, and nostalgia warped through the bottom of a liquor bottle and powered by a big, slacker melody.

Don Domestique is smart without being pretentious, plotted but not plodding, and sweet without being cloying. Indie rock highwire artists Bear Ceuse walk fine lines on this strong set, a false step in either direction meaning a fall into obvious pandering or musical theft. Throughout the album, Matthews leads the way, his lyrics embodying the uncertainty of a generation of twenty-somethings trying to figure out what it is to be a human being in the world. While that subject matter may sound vague, Don Domestique makes it incredibly personal and approachable. Thankfully, Bear Ceuse couch each new statement of confusion or frustration with an obliging, warm environment, the listener and the band struggling together.