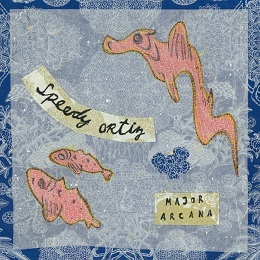 Speedy Ortiz’s Major Arcana is a swift album. Few of the songs clock in at longer than three-and-a-half minutes, and the whole work plays out over a grand total of 35. Luckily, every one of those minutes packs a wallop. Think of this as the espresso method: a strong, punchy musical concentrate. Why beat around the bush? Lead vocalist and guitarist Sadie Dupuis knows exactly what she wants to say and she’s going to say it to your face, whether it be via her lyrics — sometimes ambiguous in their simplicity — or her loud, sludgy guitar notes.

Let’s get the most obvious thing out of the way: yes, there are strains of Dinosaur Jr., Pavement, and Superchunk here. Speedy Ortiz must know that they are going to field accusations of holding a séance to bring the dream of the 90’s underground rock scene back from the dead. But what makes Major Arcana noteworthy is that, while it might initially sound like a throwback, Dupuis and co. are using an old sound to say new things about friendship and relationships in the confusing morass of your twenties. Dupuis herself is a new brand of front woman, angry and sweetly vindictive in a way that feels foreign to those of us who, in high school, furtively ordered the Slanted and Enchanted reissue from Amazon.com with our parents’ credit cards. Malkmus was never so raw, frequently hiding behind a thin veil of irony that Dupuis and her bros never appropriate. This is the real deal, ripped from notebook pages, the torn, frilly edges still hanging on.

“No Below” is arguably the standout track, if only because it showcases the vulnerability that Dupuis tries to hide with snarl and bravado on other tracks. She sings about getting teased for being on crutches one summer when she was a kid, telling the story to a new friend who she thinks would have sympathized with her plight. Backed by a slow beat and plaintive guitar notes, it’s a nod to the classic disaffected youth trope without getting too bogged down in self-pity. “I was better off just bein’ dead” is the lyric that dominates, but Dupuis follows it with “I didn’t know you yet,” maybe the most hopeful line to come out of Major Arcana.

“Plough” and “Cash Cab” are two of the rawest tracks, and the line “you picked a virgin over me,” from the former, will get seared into your memory. It’s a pointed accusation, and you can hardly help sympathizing with Dupuis (…Really, mystery man? You picked a virgin over her?). In the latter, she tells us that she wants to be with somebody just like her, someone who laughs at a crashed car rental. It’s honest and reckless, and it works perfectly in the context of what we’ve seen so far, another plot point in the unfolding story.

Ultimately, you can picture Dupuis as the kind of evasive girl who was buddy-buddy with all your guy friends in college, but treated other females with a cool distance. You desperately want her approval; you wish she would ask to borrow your t-shirts, loan you her favorite book and tell you why she loves it, study with you in the library, etc. You just want to tell her how much you love her album. You want to be the friend that she tells the story about being a kid on crutches to, and you want to play her band’s songs over and over until you learn every line, aching to know what and who the songs are about and what, exactly, makes her tick.

Essential tracks: “No Below,” “Cash Cab,” and “Plough”