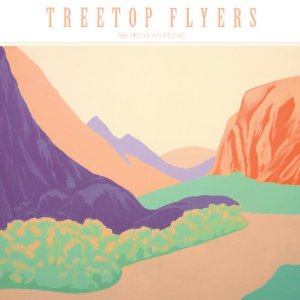 Brit-folk rockers Treetop Flyers did themselves a solid when they swapped the gray skies of dreary old England for the bright beaches and deep canyons of California to record The Mountain Moves. Their second full-length takes everyone on a nice, long, Laurel Canyon-bound drive across America, starting on an open Malibu highway and eventually winding up all the way in Montana to say hello to John Mayer.

The first leg of the trip shows lead singer Reid Morrison and the other four members gassing up the car with the sun-speckled harmonies and good vibrations of The Doobie Brothers and Crosby, Stills, Nash & Young. Tuneful opener “Things Will Change” and country-soul waltz “Rose Is in the Yard” bring the folk-leaning twang of the ’70s, although the mid-tempo, easy listening feel is present throughout the entire album. Also present is the ubiquitous spirit of Blue Oyster Cult and Stillwater, the imaginary band from Almost Famous. “Houses Are Burning” starts off with guitars that put the classic in classic rock before breaking down into a Woodstock-reminiscent riff, while “Picture Show” — sounding strangely comparable to “Don’t Fear the Reaper” or the Stones’ “Paint It Black” — repeats the lyrics, “Have you heard the birdsong on the radio/ Have you got your ticket for the picture show” at least 20 times. “Haunted House” is guilty of the same repetitiveness if you focus on its final three minutes of chorus variations, but the first four minutes of the song introduce us to a country shuffle and a jangly little riff that the fellas use to build the song with aplomb. Things get pretty jammy, though, and Treetop Flyers aren’t Big Brother & the Holding Company, so old-timey lyrical twaddle and vamping can only carry them so far.

Luckily, the boys draw influences from bands other than Woodstock headliners, busting out some Northern Soul on “She’s Gonna Run” with vibraphone tones, a distinct bass line, and “that Motown feel” where the snare just hits quarter notes. The Stax-inspired doo-wop of “Postcards” is fun, too, although lyrically it may or may not be a cop-out. The fun doesn’t end here, though, because after the gang shoop-doobie-doo-wops their way out of Detroit or Memphis or wherever the hell they are, they’ve still got enough mojo left to chug on over to a soul session in Montana with John Mayer. The relaxing blues of Continuum comes to mind on album standout “Storm Will Pass”, with its natural development and melody, although tight harmonies and a wash of guitars magnify things considerably on the chorus. This leaves contemplative closer “Is It All Worth It” as the perfect calm to the storm, and a solid place to end things on. While The Mountain Moves feels a little too familiar at times, that makes it an album option to crank up on your next road trip after you get sick of listening to The Eagles.