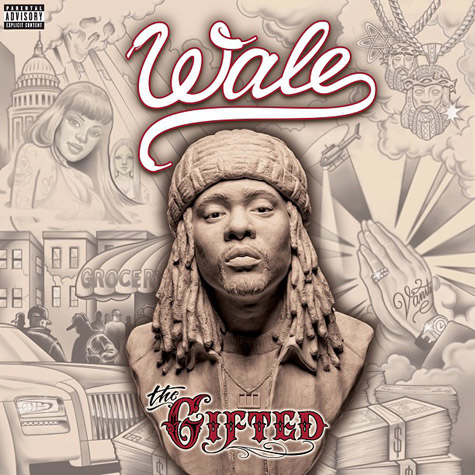 Don’t get me wrong: we in Washington, DC, are rooting very hard for Wale. Only last weekend, the Post ran an A1, above-the-fold feature on the city’s native son, its only rapper of note in the game right now. The story painted a picture of an artist very much in flux, one clambering to reach the next rung on the ladder. “They gonna love you a little different when you at the top,” he explains on “LoveHate Game”, an early track on his just-released third studio album, The Gifted. The problem is, Wale isn’t at the top, he’s simply borrowing that swagger from the A-list guests that decorate The Gifted. Those big names cast long, long shadows, and the thing that both drives the 28-year-old and haunts him is that, while he certainly has the top in sight, he knows as well as we do that he’s not quite there yet.

While, theoretically, each new album by any artist, regardless of genre, should bring them one step closer to that “top”—to notoriety, to fame, to recognition—the let-down of The Gifted might be that it’s instead more of a lateral move; there’s even a callback to his Seinfeld-name dropping Mixtape About Nothing with “Outro About Nothing”. Tracks like “Vanity” are notable for their self-awareness of the posturing that goes on in the rap world, but this very same quality is absent from “Clappers”, where our protagonist keeps it simple and painfully obvious. “Shawty got a big ol’ butt,” he raps in the refrain, and is joined later by, of course, Nicki Minaj; you can only hope that he’s taking a shot at being ironic.

While The Gifted is a solid and even enjoyable effort, we in DC can only hope that there’s more–and better–to come.