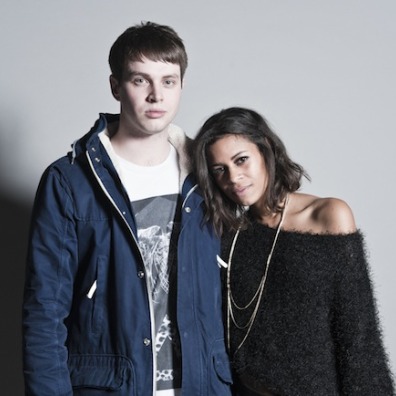 Throughout the past year, AlunaGeorge have grown their bedside music experiment into a contagious R&B movement loaded with glitchy vocal manipulations and dance-worthy chorus hooks. With only an EP and a handful of singles to their name, the duo have already nailed phenomenal collaborations, like Disclosure’s “White Noise”, and received accolades from MOBO, BRITs Critics’ Choice, and BBC’s Sound of 2013.

Recently, Consequence of Sound sat down with the duo to discuss their debut album, Body Music, their music’s relationship to the bedroom, and how it feels to have fans eagerly awaiting their new music.

How has your evening been so far?

Aluna Francis (AF): It’s been a really nice evening. We’ve just been talking about the album to people. It’s been a very chatty day, to say the least.

How do you feel about the finished product of Body Music?

George Reid (GR): It’s amazing to finally get something finished. It’s essentially what we have been working on for the past three years together, and I feel that we’re extremely proud of what we’ve done. There is a lot of ourselves in the music, which involves time, work, and, most importantly, fun.

You earned a tremendous amount of popularity thanks to your early singles and the You Know You Like It EP. How did you feel walking into the studio to record your debut? Did you feel pressured at all?

AF: It really created a positive energy, actually. It was a really great validation to know that there were going to be ears eager to receive our music. We put a lot of pressure on ourselves, as a band, to be creative and honest and develop as much as we can.

GR: It’s a real blessing, more than anything, that people are excited to hear what we’ve been up to. We’re really fortunate to be placed in this situation.

George, do you take inspiration from any R&B producers to craft your beats?

GR: Yeah, definitely many from the more pop side of the genre, like The Neptunes and Timbaland, who have done it like none other. Robbie Gerkins, as well… All of them have created these amazing, catchy songs with ridiculous backing tracks behind them. I don’t know if it’s a simple personal taste for them, but I feel that it’s a pairing that is extremely intelligent.

Aluna, do you find similar influences in developing your voice? I was watching some of your live performances, and I couldn’t believe how clear your voice sounds with your natural delivery.

AF: I think I have been super lucky to work with people in the studio that heard something in my natural voice that they liked. When you’re first starting out, it’s really encouraging to hear that people want you to perform comfortably and naturally, whether you’re adding to a track or making something up on the spot. I do find inspiration in vocalists like Thom Yorke, Jeff Buckley, and PJ Harvey. I also admire artists like CoCoRosie and The Knife, who are quirky but clear in delivering their vocals. Those kind of voices really stand out to me.

Do you plan on incorporating any live instrumentation for your upcoming live shows?

GR: We have been touring with a drummer and bass player for the past year. We have a live kit with a sampler so the drummer can mimic sounds from the album, and the bass adds a nice, even low end across the set. Initially, that was a big fear of mine because I wasn’t sure if the bass on the backing tracks used the same frequencies and would have had empty spaces in the set, but it pulls everything together nicely. It can be so difficult to make electronic music sound right live because there is a lot going on, but those additional forces help us avoid that “smoke and mirrors” effect and truly bring the music alive.

It’s amazing how everything is mastered to your personal liking in the studio, but it enters a completely different universe once it hits the stage. How do you feel about today’s music scene, especially considering the DIY method similar to your recording process?

GR: It’s fantastic! I think this is the first proper generation of people who have music software readily available to mess around with. It influences people to approach music in a completely different way. You don’t have to pick up the guitar or piano to make music anymore; there’s different ways to being a musician that don’t involve the classic four-piece band.

AF: There’s just another way to starting a band. Those traditional elements are still major pieces of our music without veering away from the main idea. Behind the scenes, George is an amazing guitar and piano player. I have also picked up some guitar and piano. Because George has experience with that software, we’re able to combine the two to our liking.

GR: It simply supplies a lot more opportunity for everyone.

I’m not sure if you have watched Pharrell Williams’ contribution to Daft Punk’s Creators Project for Random Access Memories, but something he mentioned was how people should listen to the record for the first time. He recommended listeners to pull up to the edge of the beach with your special someone for the first spin. What would be the perfect atmosphere to listen to Body Music in?

AF: We wrote a lot of this record in George’s bedroom. We feel that there is a song for each activity that you would partake in there. To be more specific, in your bedroom and loud.

GR: Maybe even with your special someone, but they may have to come and go depending on the track. [Laughs.]

I’ve spoken with musicians in the past who also feel most comfortable recording and writing their music in the comfort of their home or bedroom. Do you guys relate to that?

GR: Not so much anymore, actually. Writing in the bedroom was based more out of necessity than choice, to start. [Laughs.]0 We learned how to work in a very intimate environment; it’s not a big room, so we were working in close quarters. We have recorded in studios and residential spots that were even smaller than my bedroom, so we became used to working in very close proximity to each other and avoiding any surrounding distractions while we work.

AF: We’re kind of homebodies, so we like to keep it simple and comfortable. We often have our cats in our home studio. When we recorded in the residential area, we really enjoyed having a place to make tea and lunch or go for a run in the woods late at night. None of our equipment was high-end or brand-new, but we appreciated the smaller things, instead.

From what I gathered on my first few listens of the record, love is a central theme to Body Music. How do you feel love impacts your everyday lives, and how does it transition into your music?

AF: Love is one of those things that has different contexts and relationships. The source of many of our lyrics are drawn from stories that are told by George, my friends, or just me. It’s helped me to write a complete song – reaching both sides of the story without being insular or single-minded. Being that way lets the songs go nowhere. I never want to leave anyone flatlined by the end of the song because I’m just obsessed, or something like that. I like there to be a way out. The collaboration of listening to someone’s story and incorporating your own perspective on it makes them more well-rounded and open.

GR: There are a few songs that are inspired by experiences or ideas that I have heard as well, even though Aluna does the bulk of the lyric writing. For me, the main standout song on Body Music is “Superstar”, which is about my Dad and how awesome he is. There are many themes that we incorporated throughout the record, but we don’t want to spoil too much. One of the most beautiful things about music is that everyone will gravitate towards different messages and interpret it in their own way.

AF: “Best Be Believing” is probably one of the most interesting tracks on the record because we collaborated with Sam Frank, whose style of lyric writing was hilarious. He would play with the most unspeakable, bizarre, and rude phrases and sentences to create an atmosphere of amusement. Then, out of nowhere, you would get a serious, on-point meaning from something and instantly evoke that “woah” moment. He was a roller coaster ride to work with. It was like visiting another planet.

GR: He’s also a bloody amazing musician, and he seems to work similarly to my style of writing music, which involves improvising and going with the most instinctual ideas that come to mind. He does it at such a warp speed, so it was really inspiring to see that. Seeing things like that are encouraging because it assures that you’re not being an idiot [laughs].

How was your experience collaborating with Disclosure on “White Noise”?

AF: That was another fun day, but it was really different. I walked into a close-knit environment where people are used to working with each other, so I felt foreign to their environment. I could imagine it being similar to walking into a studio with me and George. It was almost like the first day of school; they showed me around the studio, showing me what they were working on, playing their tunes, and helping me feel comfortable with them. After they opened the floor for some of my ideas, the day took off very quickly, and we knocked it out. Everyone put their two cents in while leaving their egos at the door, which was interesting especially for working with boys. [Laughs.] I really enjoyed it, even though I was really apprehensive at first. I have never collaborated with another artist like this before.

Wow! That was your first collaboration like that?! What an amazing first turnout!

I watched your performance for the Bacardi Beginnings series, and the announcer mentioned that you have been mentored by Friendly Fires. How were you introduced to them, and how did they play a role in your development as artists?

GR: Friendly Fires chose us as the new band to be showcased at the Bacardi event, so that helped us get a leg up in the music scene. The most beneficial thing that I took away from it was the conversation with two guys that have been in a band for three or four years. Jack, the band’s drummer, told me that we had to figure out a good acoustic live setup because people ask for it all of them time. “Even though it’s boring, you have to sort it out.”

AF: Funny enough, I used to hang out with them in St. Albans, which is where we’re all from. When they got bigger, we lost touch a bit, so this was our way of coming back together. It’s a really special thing to see your friends who you used to hang out in the studio with doing major things in the music scene.

GR: It was good to learn from them about solely dedicating ourselves to our music. We’ve been doing this every day since the beginning of 2012, which is when we got our publishing contract. From there, we didn’t have to work any other jobs and could focus solely on our music. That allowed us to write and perform more, which has made this become a different job every day for the past two years. It’s all super exciting because we don’t know what we’re actually doing most of the time. [Laughs.]