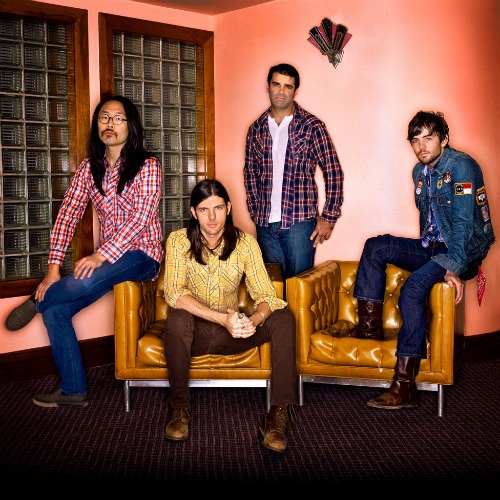 Given that it took nearly three years for The Avett Brothers to follow up 2009’s I and Love and You with 2012s The Carpenter, word of a new record slated for as soon as this fall comes as a pleasant, if not random, surprise. Yet according to a recent interview with Radio.com, the album’s ready for a September or October release and will be comprised of tracks written and recorded during The Carpenter, in addition to material as old as seven or eight years back.

So, whether you had already settled in for another long wait, or thought youd never hear their pre-major label tunes again, it looks like the Avett Brothers have a few unexpected inclinations left, even after a solid decade and seven studio releases later. With that in mind, we thought wed round up a few other things that might leave you perplexed.

1. You can buy an Avett Brothers skate deck

It probably makes sense for a band with as many non-roots music influences as the Avetts to have some unexpected merch. According to their official site, if you go to a show on their current tour, you can buy an Avett-inspired skate deck featuring Shel Silverstein-esque cartoon renderings of the band, designed by Seth Avett. Even better is the picture the band posted on their Facebook of the younger Avett, mid-air on said skate deck (see above).

When music great Doc Watson died last year, Seth wrote a piece for Garden and Gun Magazine recounting his first meeting with the music legend as a 13-year-old with braces, skate shoes, and limited appreciation for music. (Well, that explains the skate decks.) At the time, Seth was mostly into Nirvana, but when a friend of his dads was able to arrange a day together, he says it completely changed the way he thought about melody and saw the acoustic guitar.

3. Scott almost had a MFA  in painting

In an interview with Design Sponge, Scott discussed his non-musical art with writer Rachael Maddux. Hed gone to university for broadcast communications, and then finished with a BFA in painting. Just as the band was starting to take off, however, Scott was eyeing an MFA in painting from University of Florida but chose to stick with the band instead. In some ways the fact that I never followed through with [painting] has kept me in touch with it, this affair with the visual that I just cant shake. I think its just a part of me, he told Maddux. These days he supplies all the cover art and even stage backdrops for the band.

4. Theyre into the Beastie Boys

By now, were used to the Avetts proudly wearing their rock and punk influences. They scream, they spit lyrics (Talf of Indolence, Slight Figure of Speech), theyre a bluegrass band with a drummer. But that might not be all. During a performance in Nashville, Tenn. this past May, Seth told the crowd before launching into Distraction #74 that the decision to trade off words and phrases in the songs last verse was inspired by the Beastie Boys. They quickly realized it took some coordination to orchestrate.

During a June 2013 interview with the Milwaukee Journal Sentinel, the band discussed their recent reads, which included Middlesex by Jeffrey Eugenides, Ironweed by William Kennedy, and Ghandis autobiography. Seth said they all manage to balance multiple books at a time to varying degrees of success. Cellist Joe Kwon is taking his fifth run at finishing Zen and the Art of Motorcycle Maintenance. As far as finding that next book to read, Seth has a theory: Can you really go wrong if you just go down the list of Pulitzer Prize winners and just read those?