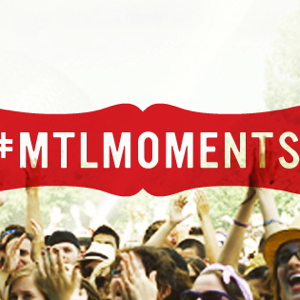 For two and a half weeks, Consequence of Sounds Sasha Geffen will be exploring Montreal and its music scene, attending the mammoth three-day music festival Osheaga (featuring The Cure, Beck, New Order, Vampire Weekend and many more), and taking in the local culture. Follow her adventures here, or through the hashtag #MTLMoments on Instagram and Twitter, and visit Tourisme Montreals website to learn more about the city.

We end up back in Mile End over the weekend, both to stockpile bagels from Fairmount and to chat with local electronic duo Blue Hawaii as they swing by Montreal before a brief North American tour. This past March, Alexander Cowan and Raphaelle Standell-Preston (who go by the pseudonyms Agor and Ra) released their first LP Untogether via local imprint Arbutus. Cowan’s brother Sebastian runs the label, which is also home to Standell-Preston’s other project BRAIDS. It’s easy to see the tight weave of the music community here.

“I think this is definitely the most fertile environment for music possible,” says Cowan as we sit out on Café Club Social’s patio. Like the festival directors we’ve talked to, he cites the city’s low-stress economy as a big factor in the way the artistic community is able to function. “Most people I know only work like two days a week. It’s so unlike New York or London. You can really swing it on like $400 a month for everything.”

But Montreal’s prices don’t just draw artists in. They affect the pace of the city once they’re here. The way time’s able to pass unfettered allows for a certain measure of serendipity. Musicians can get together and work loosely and experimentally rather than actively and deliberately. Blue Hawaii formed after Standell-Preston showed up to a gig at Cowan’s DIY loft venue and the two became close friends. “Our band developed from the community,” Cowan says. “We started making music because of who we were and what we meant to each other in a social context. It wouldn’t have happened in a different city.”

The competitive spirit that runs through a place like New York does seem muted here. When artists don’t have to fight for their own survival, they feel less of a need to trample each other on the way to the spotlight. They get there on the strength of the music, not the price tag of a PR team. The fact that French is the predominant language also appears to insulate Montreal from the consumerism that makes certain American cities feel so cannibalistic. “It’s Quebec. All the advertising’s in French. There’s not that booming industry,” says Standell-Preston. ”There doesn’t seem to be a mix of commercialism and music here,” Cowan agrees. “It’s not like bands that would pop out of Toronto or New York where it seems like they’re groomed for a major label. I never hear that happening. There’s just less money here in general. There’s definitely no Drake or Justin Bieber coming out of here.”

For artists like Cowan, who has been living in Montreal upwards of 8 years, the city’s lax atmosphere works best as a formative environmentan incubator for a more active lifestyle. Both he and Standell-Preston feel like the road is more of their home now. “I feel like the city has given a lot back to me,” says Cowan. “I’ve put a lot of time in and met a lot of people and lived here for a long time. It’s really comfortable for me. I can go anywhere and feel at home. At the same time, I’ve been given this opportunity where I can now tour.” Performing live feels like the most real kind of music-making for the pair, who are looking to relocate to London. But for brand new artists looking to make work in a city that’s more welcoming than abrasive, Montreal remains a nurturing space. “You’re a block away from all your friends,” Cowan says. “It’s one of those cities: an urban village.”