The 25 Weirdest Pieces of Band Merchandise 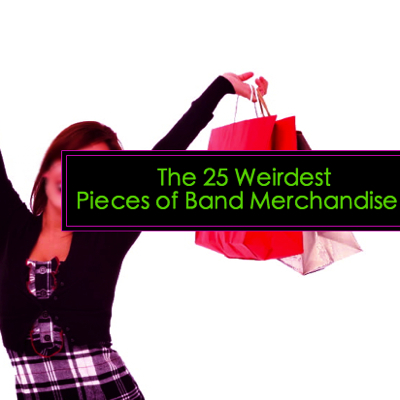 Think you’ll “Get Lucky” with those faux Durex Daft Punk condoms? What a laugh riot. While crazed fans will clench onto them in hopes of avoiding a night with the spank bank, Thomas Bangalter and Guy-Manuel de Homem-Christo will be laughing their way to an actual bank. (Well, that is, if they’re actually real.) But you and I both know that’s not the first piece of rubbish to surface from any band’s camp. Not in a world where KISS exists, and especially not one where ravenous consumers are a dime a dozen.

Truth: Music fans are no different than the hulking masses that loiter next to Wal-Mart at 3 p.m. on the Monday before Thanksgiving. They have the same potential chaotic chutzpah as the idiots shooting people for a pair of LeBrons. And while our punk rock might say otherwise, we’re innate consumers, ready to feast upon whatever we can get and whenever it’s available. At the end of the night, no band manager needs to be Richard M. Schulze to get their band a quick buck or five.

Well, while that doesn’t exist (yet), we did find a few other items of note, the sort of purchases that would make your wallet literally jump out of your pocket, evolve into a cartoon character, and scream obscenities at you in disgust. Preferably in the mall. Or with Sinbad. You’ve stopped reading, haven’t you?