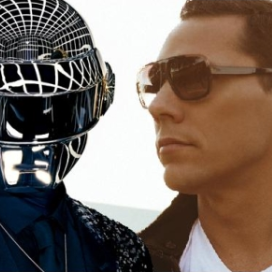 At least based on gross earnings, TiÃ«sto is of equal footing to Daft Punk within the EDM community. But the Dutch DJ doesn’t consider himself on the same level as the French robots — no, as he told The Huffington Post, Im destroying them now. Sorry Daft Punk.”

TiÃ«sto seemed perturbed by the recent collaboration between Daft Punk and his childhood hero, Giorgio Moroder. It got so much attention because its so different and its an attitude album, TiÃ«sto said of Daft Punk’s Random Access Memories. Its cool to like Daft Punk. Even if youre not into the song, as soon as you hear [Get Lucky], you see all the cool people go, Oh yeah, this is cool, thats my song, and they dont really even enjoy it.”

He continued, “the Tron soundtrack wasnt that great and this is not great, either. But because its Daft Punk and theyre supposed to be cool and they had the amazing pyramid at Coachella a couple of years ago and the helmets  theyre fucking cool. But the music doesnt deliver on the hype so much.

In related news, TiÃ«sto is the only person ever to get along with Liam Gallagher.