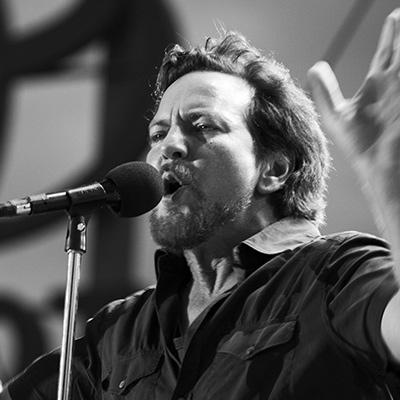 Pearl Jam played just seven songs before torrential downpours delayed their Friday night show at Chicago’s Wrigley Field by nearly three hours. But when the band finally returned to stage around Midnight, they treated the rain-soaked crowed to the world premiere of two songs off their new album, Lightning Bolt, in the form of its title track and “Future Days”.

“Lightning Bolt” isn’t as fast its name implies, or even as carnal as the album’s lead single, but it sweeps along with the same energy that kept Backspacer peddling, and tosses the spotlight on one of Mike McCready’s strongest solos in years.

Pearl Jam producer Brendan O’Brien joined the band on keys for the meditative and hopeful anti-apocalyptic ballad, “Future Days”. Fans of Vedder’s solo work and sentimentality of Springsteen’s post-90s hymnals will keep this one spinning before bed.

Read our full report of the concert here.