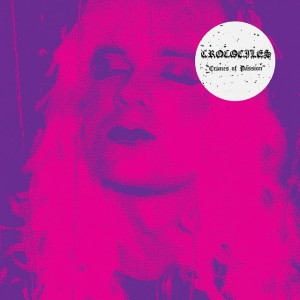 Crimes of Passion is an appropriate name for the fourth studio album from the California noise pop duo Crocodiles, since they seem to advocate for feelings over logic. This isn’t a bad thing: Tracks such as “Marquis De Sade” are infectious and entirely enveloping. The whole work plays out like the soundtrack to a surfing movie, but it’s more Point Break than Endless Summer. There’s an edge to these songs, a kind of darkness burning through the fuzzy, reverb-heavy pop.

Crocodiles’ music may sound like it exists in an echo chamber, but don’t confuse that with a vacuum. The duo is great at appropriating the sounds of bands like the Jesus & Mary Chain and even Christopher Owens’ former band Girls. While they’ve honed their craft well, and certainly know how to play on listeners’ nostalgia, the biggest flaw that can be attributed to Crocodiles is that it’s sometimes difficult not to hear strains of these predecessors peeking through.

But for what it is — the latest installment in a tradition of sad dudes trying to numb their pain with upbeat pop — it does its job well. Tracks like “She Splits Me Up” hit that mark just about on the bullseye, managing to convey emotion through shimmering guitar tones and a swift drum beat. “Un Chant D’Amour” is an ideal closer for the album, a beautiful mirage of a song that could score the end credits of said surfing movie, as the protagonists paddle off into the sunset in search of the next big wave.

Essential Tracks: “Marquis De Sade”, “She Splits Me Up”, and “Un Chant D’Amour”