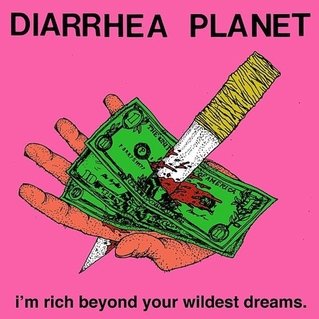 Looks like all that shitting around Diarrhea Planet has been doing for the past three years has finally paid off. Nashville’s most garishly-named punk-pop outfit has splattered itself all over the local rock scene after sharing basement stages with Infinity Cat labelmates like JEFF the Brotherhood, Natural Child, and Heavy Cream, and heavy touring with the likes of Titus Andronicus and Fucked Up. Maybe those babies just got enough distance from music school and became accustomed to the crisp taste of freedom and PBR, but the upcoming release of their second full-length shows some growing up, as they transition from merely being Nashville’s bathroom-humored boy-band spoof to devout rock ‘n’ rollers.

Yes, the boys toss off their ceremonial diapers and bust open the grand shitbox with I’m Rich Beyond Your Wildest Dreams — 13 tracks of quadruple-guitar shredding and punchy pop hooks to take you back to your glory days. Or your uncle’s glory days, because maybe you weren’t around for Iron Maiden, Cheap Trick, or Thin Lizzy’s heyday, as referenced by “Lite Dream”, “Ugliest Son”, and “Babyhead”. If you recall your first taste of metal from the Teenage Mutant Ninja Turtles theme (or, god forbid, Power Rangers), you’ll enjoy those selections. But fast forward to around ’97 and the early Aughts, when you were cranking Blink-182, New Found Glory, and Weezer, and you’ll find an appreciation for “Separations”, “Field of Dreams”, or “Hammer of the Gods”.

Besides the commonalities found in Diarrhea Planet’s crunching power chords, catchy melodies, and hook-heavy guitar lines, they play their shared riffs in harmonic tandem, giving them the flair to pull off the more absurd numbers. Take “Togano”, for example: The power pop “My Sharona”-intro sound-alike might as well accompany the Animal House toga party scene. But there are surprisingly few partying references and crude jokes on this album, even if lyrically Diarrhea Planet doesn’t dump every detail out; “Kids” may be the exception, as it sincerely tackles the chaos of entering adulthood.

Diarrhea Planet may be a shitshow, but they’ve provided the necessary links between the new school punk, heavy metal, and arena rock an entire generation grew up loving. But whether their versions of the classics are ultimately priceless or just cheap imitations, the good-natured Planeteers are sitting atop a porcelain throne of feel-good songs. Maybe Diarrhea Planet really is Rich Beyond Your Wildest Dreams, but more importantly, they’ve produced an album that is a highly entertaining asset perfect for coasting out of summer.