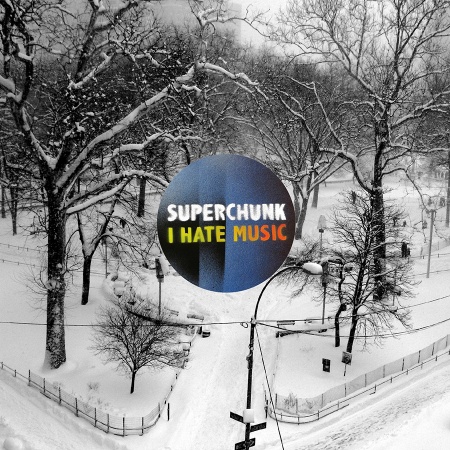 Superchunk releases their 10th studio album, I Hate Music, this week. To discuss the new record, Consequence of Sound writers Matt Melis, Dan Caffrey, and Ryan Bray sat down in the most indie, DIY location in Chicago: a Starbucks inside a Dominick’s (a major supermarket chain).

Matt Melis (MM): So, what struck everyone most about I Hate Music?

Ryan Bray (RB): For me, the record’s more of a long haul than their other records. With the opener, “Overflows”, there’s that slow build. They set you up to think, “Will they ease into it?”—which is something that Superchunk rarely, if ever, does. They’re usually like little kids with Pixy Stix who just wanna go. But it gives you pause. And then you think about that album title, I Hate Music, which is the cloud that hangs over the record. Lyrically, it’s weightier—mulling over their lot in life—but musically they haven’t budged an inch since 1991. It’s the same spirited, youthful, and alive Superchunk juxtaposed with some heavier subject matter.

Dan Caffrey (DC): I Hate Music is about a lot of midlife issues, which makes sense because the band are in their forties now, right? But what I loved about it was that it doesn’t lose any of the infectious Superchunk energy: the big chords, the hooks, and the pace. I went in worrying that it would be this sort of dirge for them, but it wasn’t at all. I read that the band had a good friend who just died, and you can definitely hear that bleeding through on songs like “FOH”. They aren’t offering any solutions for dealing with death and crises as you get older, but they recognize them and celebrate that life goes on.

MM: There is the ambivalence of aging and the tension between growing jaded and keeping young at heart, but the record isn’t about just anyone getting older and dealing with life’s problems. It’s about musicians doing so. I Hate Music really focuses on the act of creating music to cope. The escapism of “the world slipped our minds” while playing covers for Spanish friends (“Trees in Barcelona”) or Mac McCaughan shrugging, “But I got nothing else [except music], so I guess here we go/ Cram into the back of the van” (“Me & You & Jackie Mittoo”). This is how they, as a band, deal with what all of us inevitably deal with.

DC: So, what were the standout moments for you guys?

MM: My entry point into albums is almost always the vocals, but here it was actually Jon Wurster’s drumming. It’s almost like PR sent me just the drum and vocal tracks by mistake, because those are the interactions my ears latched on to. So, my favorites are heavier, fuzzier songs like “Low F” and “Void”, where Wurster’s drums bounce between being the backdrop, the forefront, and the accent to McCaughan’s vox.

DC: Yeah, on this album, he [Wurster] has a fill like every 30 seconds, and it makes everything pop. For me, the best are the poppiest songs: “Low F”, “FOH”, and “Out of the Sun”. And the most sugary ones, like “Out of the Sun”, are actually about the more down subjects: not being able to get out of bed or not wanting to be around people. So, it’s almost like they went extra poppy to make up for the more dire subject matter.

RB: I liked the way “Overflows” eases in and set up the big picture for the record. “Me & You & Jackie Mittoo” has this really distinct, almost Fountains of Wayne quality. There was a power-pop, Rick Springfield kind of thing, which caught me by surprise, but it still sounded like Superchunk.

MM: Any lowlights on the record?

RB: I’m a purist. As much as I appreciate that it’s a more subdued Superchunk record, when they reign it in on tracks like “Out of the Sun”, I think it lingers too long. In general, though, maybe the record was a little overlong. Some of those songs that tipped the scale at past three and a half minutes lose it toward the end. Keep in mind, a bad Superchunk song is still better than most.

MM: I’m coming from a similar place. You see some of that classic Superchunk velocity and adrenaline give way to poppyness, especially on that second half stretch of “Breaking Down”, “Out of the Sun”, and “Your Theme”. And the album lulls there for me. There’s something I love in each of those songs, but I was waiting for something just to rip through that poppy stretch.

DC: I did like that back half, but my least two favorite songs were there: “Breaking Down” and “Your Theme”. Maybe it’s an insufficient barometer, but I just can’t remember what those songs sound like. They were forgettable, which is something I can’t say about any other songs here.

MM: So, where do we stand on I Hate Music?

DC: There are some lulls on that back half, but those songs also play into these peaks and valleys of the album. “Your Theme” leads right into “FOH”, which is my favorite song on the album. And when the rest of the material is so strong, a band can get away with having a couple dips on a record.

RB: It’s a Superchunk record. It doesn’t necessarily add a whole lot to the formula, which is maybe asking a lot of a band that’s been around for 23 years. By the same token, there are a lot of subtle wrinkles that should help it make its own mark in their catalog.

MM: All my favorite Superchunk albums (No Pocky for Kitty, Majesty Shredding) start with a song that pulls you into this actual chunk of music and end with a cut that makes you want to go back and listen all over again. And this does that, too. “Overflows” grabs hold, and “What Can We Do” provides that resolution to the album’s journey: “Some people go through life/ All they see is red lights/ But we don’t wanna live like that/ Get tied up, get trapped.” It makes me want to take that journey again. I Hate Music is no Majesty Shredding, but it’s no slacker either.