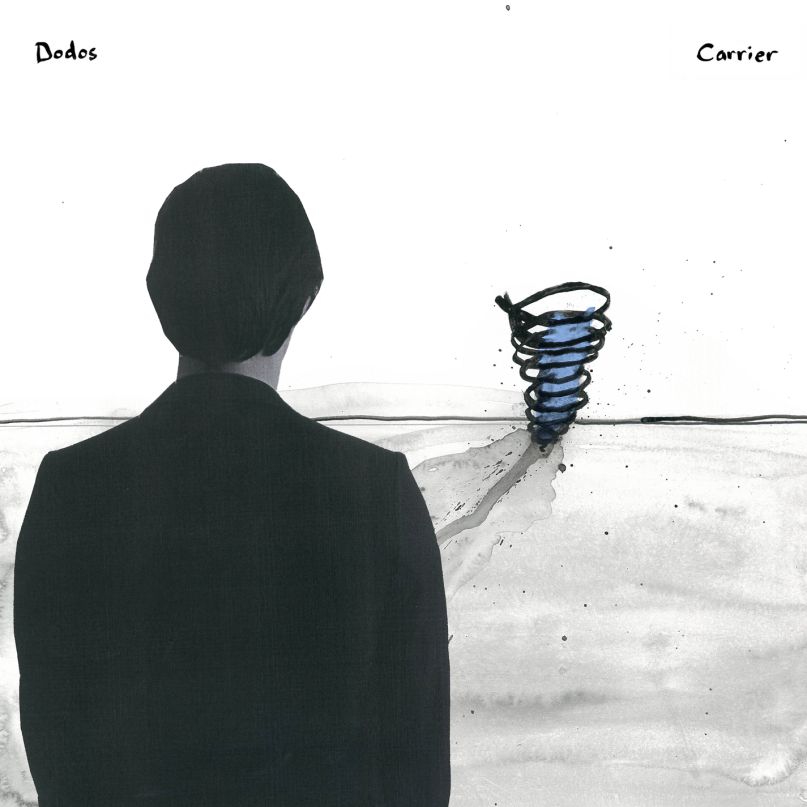 Notwithstanding the success of 2011s No Color, an album which broke The Dodos into the Billboard Hot 100, the San Francisco duo abruptly ditched Frenchkiss Records with the hopes of “trying something new. Carrier was recorded at John Vanderslices Tiny Telephone studios, they swapped out longtime sound engineer John Askew for co-producers Jay and Ian Pellicci, and they signed on with Polyvinyl Records. According to singer/songwriter/guitarist Meric Long, all these changes combat feeling a bit rooted. In addition, several tracks  feature the virtuosic Magik*Magik Orchestra, a made-to-order ensemble whose past collaborators include Jonny Greenwood and The Walkmen.

Meric Long opted for a new songwriting approach for The Dodos’ 5th studio LP, as he was inspired by late Women guitarist Chris Reimers ability to transform and shape sound with an electric guitar. By recording his vocals before finalizing any of the instrumental tracks, the guitarist ventured outside his usual percussive riffs.

The result is an intricately variegated album torn between two countervailing threads: heartache and rejuvenation. Juxtaposing feelings of loss brought on by Reimers unexpected death with the atmosphere of dynamic experimentation he helped cultivate while touring with The Dodos, the ebullient spunk anchoring Carriers first half melts into a bitter morass of alienation (Stranger), bereavement (Death), and disaster (Destroyer) as the LP unfolds.

Opening ditty Transformer ripples with coruscating guitar lines and Longs seductive whisper, as the singer nonchalantly grapples with some utterly unanswerable questions (What does a song hold?/ What is love?). Concocting an ambiance of optimism, The Dodos build into a peppy instrumental with the snare drum smack of percussionist Logan Kroeber.

Switching gears abruptly with brooding cut Stranger, The Dodos highlight the stinging awkwardness plaguing outcasts and solitarians everywhere. Simultaneously invisible and out of his element, the songs protagonist tentatively ponders, As a stranger, do you see me? On the understated and tactfully sparse Death, Longs phantasmal guitar melts over whimpering violins to elucidate the agony of losing a friend to the great abyss (Death, what can be worse?/ If I took your place, would it hurt?”). The up-tempo Destroyer, which chronicles the decay of unity and love, touts some of the albums best lyrical moments. Blasting a dark and twisted, cold and gifted ex-lover for demanding more than one person could ever hope to provide, the singer flippantly and condescendingly jabs, And tears they come, like a geyser/ Power pressure, building up/ Im not the one to stop it.

Yet again gravitating towards the themes of loss and isolation on closer The Ocean, the band hauntingly echoes a single rhetorical question atop an incessantly thumping bass drum and silvery, wilting strings. As if under the impression that hell ultimately be rewarded with an enlightened answer, the singer drones ad nauseam, Why wont you be where I want you to be? Unprepared to let go of his erstwhile companion, the singer hangs on this line as if its the last memory of his departed friend. Though Longs fragile and scarred pleadings are likely addressed to Reimer, the universality of his inquiry renders it applicable to anyone that’s passed away too soon, leaving friends and family behind.

Carrier is weighed down by back end filler. Sluggish, down-tempo waltz Holidays is one of several throwaway songs, though its blasé middle ground serves as something of an interlude between the albums breezy cuts and those dealing with comparatively depressive subjects. Family is a lyrically insipid and instrumentally flat number, while irritatingly repetitious The Current builds and retreats without ever really getting anywhere interesting.

Although omitting these limp cuts could have made Carrier a more commensurate offering, its still The Dodos’ strongest effort since 2006s freewheeling debut, Beware of the Maniacs. By contrasting downer themes of death/agony/alienation against an experimental angle, The Dodos cull authenticity from the ashes of heartache.