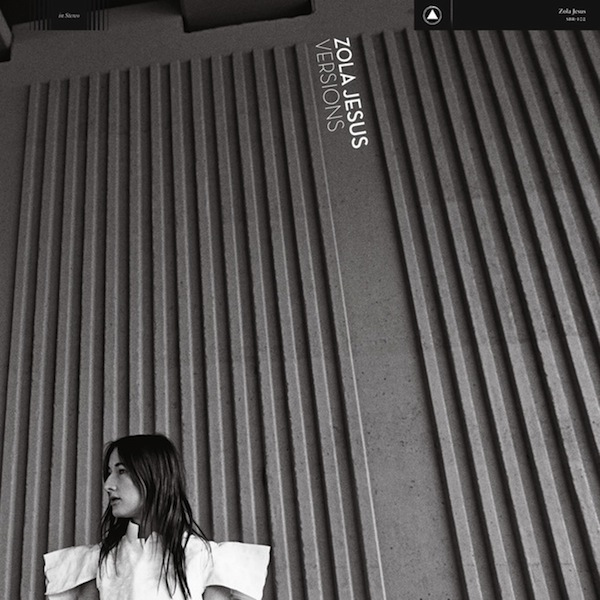 Like Neko Case or Antony Hegarty, Zola Jesus sings with the kind of timbre that gets listeners to describe her as “that voice.” Plainly put, she’s got one hell of one. Since debuting on Sacred Bones in 2009, Nika Roza Danilova has built a whole assembly of rusty industrial cages, only to break them open with those torrential vocals. Her catalog of classically-informed goth pop pits Danilova’s voice against its surroundings; inside songs like “Night” or “Vessel”, she practically bludgeons back the elemental chaos that unfolds around her.

With the help of composer and former no wave pioneer JG Thirlwell (of Foetus), Zola Jesus adapted nine newer songs to be played live by a string quartet inside New York City’s iconic Guggenheim museum. Versions is the studio document of that performance — essentially an unplugged companion to 2011’s Conatus with a few choice cuts from 2010’s Stridulum and Valusia EPs. For the first time in her recorded discography, Zola Jesus performs within an environment that’s more symbiotic than antagonistic. Instead of thrashing against her instrumentation, Danilova glides along with it.

Many of the songs chosen for the Guggenheim concert already seemed primed to be played on strings. The Conatus cut of ”In Your Nature” takes off on an engine of vibrating cellos and lilting violins; Versions just offers a lither rendition. Thirlwell’s work there hinges on simplification rather than translation. But the sturdy darkwave of Stridulum needed a more strenuous overhaul. Once shrouded in gloomy synth pads, “Night” and “Run Me Out” attempt to flex the same muscle using only strings and drum machines. It’s not a total success. The violins that orbit “Night” would feel more at home over the trailer for a sci-fi blockbuster than under Danilova’s voice. “Run Me Out” steers a little clearer of melodrama, but overcrowds the delicate space of the original with too many superfluous melodies. When the most interesting tension lies between Zola Jesus and the void behind her, do you really need the whole quartet to needle around at once?

More careful adaptations ultimately compensate for the album’s clumsier moments. Opener “Avalanche (Slow)” strips away the agitation of its studio cut to drift in snowily. Danilova sings with greater restraint than on any previous recording. She’s always proven the power of her voice; here, she gets to show off its delicacy. This Zola Jesus is more dejected than combative, more gently heartbroken. She stretches out inside her sadness instead of trying to beat it away.

But it’s “Fall Back”, the only instance of new material on Versions, that proves that the album is more than just a studio capture of a live performance, a relic for record collectors. The song elaborates on that new vulnerability hinted at in the opening track. Danilova doesn’t begin with her signature belt, but clambers up to it. “I would do anything to be the one with you,” she sings at the climax, unhinged. By beginning the song composed, Zola Jesus can make a point of losing her composure. She can blast apart what she builds.

Nothing on Versions quite tops the intensity of those first two tracks, and so the project carries some loose weight at its bottom half. The seven faithful, acoustic renditions that follow “Fall Back” give a good impression of what an evening with Zola Jesus at the Guggenheim must have sounded like, but they don’t push her up to the same urgency heard in the album’s first minutes. That’s because they’re not a finished product. They’re a hinge, a transitional point, a document of an artist learning. By stripping her songs to the bones and reframing them within an unusual space, Zola Jesus has plumbed a mode of performance that doesn’t require her to circumnavigate harshness. Trading hostile sounds for soothing ones has actually allowed Danilova to channel a more complex emotional spectrum. Zola Jesus always sang like she was in danger of drowning. On Versions, she learns how to swim.