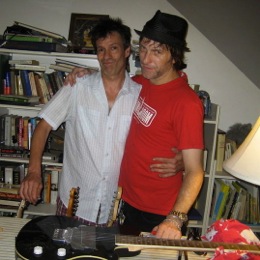 With just nine days to go until The Replacements return to the stage for their first show in 22 years, the band’s full lineup has been confirmed. According to the Star Tribune, founding members Paul Westerberg and Tommy Stinson will be accompanied by all-star session drummer Josh Freese (Guns N’ Roses, Nine Inch Nails, Devo, Weezer) and guitarist David Minehan (The Neighborhoods).

Both Freese and Minehan toured with Westerberg in the early 1990s. Freese also performed alongside Stinson as a member of Guns N’ Roses.

The Replacements’ manager, Darren Hill, confirmed the band’s lineup to the Star Tribune. He added that the foursome have no shows scheduled beyond their upcoming appearance at Riot Fest Chicago, along with offshoots in Toronto and Denver.

Below, watch footage of the band rehearsing “Favorite Thing”: