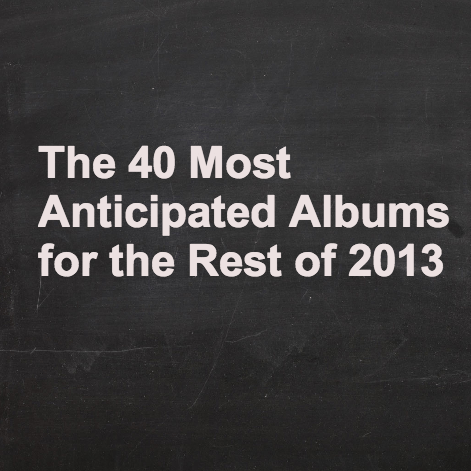 This year has already seen new releases from (ahem) David Bowie, Daft Punk, My Bloody Valentine, Justin Timberlake, Kanye West, Jay Z, Nine Inch Nails, Queens of the Stone Age, Boards of Canada, Atoms For Peace, Depeche Mode, Vampire Weekend, Yeah Yeah Yeahs, The National, Black Sabbath, Sigur Rós, Tyler, the Creator, ASAP Rocky, The Flaming Lips, How to Destroy Angels, Nick Cave and the Bad Seeds, and Local Natives. What could possibly be left, you ask? A lot, actually. Forty, to be exact. So, don’t go making those year-end lists just yet, because the best is yet to come. Maybe.

Ladies and gentlemen: The 40 Most Anticipated Albums for the Rest of 2013…

Arctic Monkeys draw inspiration from G-funk legends Warren G and Mac Dreis on their latest 12-track effort. Produced by James Ford and co-produced by Ross Orton, the album was recorded at Sage & Sound Recording in Los Angeles and Rancho De La Luna in Joshua Tree. Guest contributors include Queens of the Stone Age frontman Josh Homme, Pete Thomas (Elvis Costello), and Bill Ryder-Jones (The Coral). What’s more, the words of poet John Cooper Clarke are featured on the track “I Wanna Be Yours”. -Michael Roffman

Grab your tuxedos. Our favorite funk/R&B diva, Janelle Monáe returns with The Electric Lady, a 19-track continuation of her futuristic dystopian saga of androids and those who would oppress them. Social commentary aside, we’ve also been anticipating danceable, grooveable tunes and collaborations with artists like Erykah Badu, Miguel, Prince, and Esperanza Spalding. Judging by Monáe’s first two singles — “Dance Apocalyptic” and “Q.U.E.E.N.” — her usual genre-bending fusion of everything from pop and hip-hop to funk is in top form. –Erin Carson

London Grammar – If You Wait

Combining ambient instrumentation a la The xx and soaring, cavernous vocals akin to Florence Welch, UK newcomers London Grammar have easily turned countless music heads in just the last few months. And, thanks to a string of successful singles like “Hey Now” and “Strong”, their Metal & Dust EP, and even a collaboration with buzzy electronic duo Disclosure, anticipation around the band’s debut full-length is at an all-time high. Eighteen months in the making, the new record is a critical next step for the trio. Listen now: “Wasting My Young Years” –Michelle Geslani

It just this second (read: a couple days ago) dropped as a stream, so you’ve likely already heard the latest from Drake’s on-again off-again musical collaborator, the appropriately titled Kiss Land. But if you a.) haven’t or b.) need the sweet, sweet smell of liner notes and compact discs in your life, then that’s going to drop next week. It’s everything you’ve come to expect from Abel Tesfaye: sensuous, dark, grimy, maybe even a little offensive, but the Toronto musician’s anti-ballads are still sure to inspire hookups, both wanted and regretted. -Chris Bosman

“We’re not trying to make music that everyone understands the first time they hear it,” warns Ben Goldwasser in a Rolling Stone interview. “I don’t even know if it’s music we would want to listen to,” Andrew VanWyngarden recently explained to the same publication. So, it’s anyone’s guess how MGMT’s self-titled third studio album will fare. Though their recent performance of “Your Life is a Lie” on Letterman left us nauseous, album opener and this year’s past RSD exclusive “Alien Days” ushered an alluring electro-psychedelic atmosphere that’s still under our skin. Maybe the album’s accompanying portfolio of CGI images and videos they’ve dubbed, “the Optimizer,” will offer some clarity. Maybe. –Henry Hauser

Listen: “Your Life is a Lie”