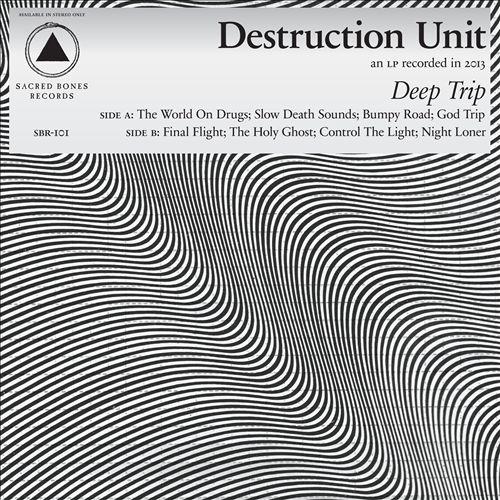 The bone-dry, sun-scorched terrain of the Arizona desert might not seem like your typical breeding ground for good rock ‘n’ roll. But in the case of Destruction Unit, the backdrop perfectly suits the scathing brand of far-gone, noisy psychedelia they tamper with. Mesa is a far cry from New York’s calculated bohemian cool and L.A.’s flair for posh pretense, and it has something completely antithetical working in its favor: the creativity that can be born out of the stagnancy of life in the desert.

Deep Trip, Destruction Unit’s second effort, is a druggy mindfuck of a record, one that staggers a wayward line between heat stroke and altered consciousness. It’s loud, colorful, weird, and, as the title asserts, trippy. Mining from a taster’s choice of underground heroes including Kyuss, Spacemen 3, the Misfits, and Bauhaus, the band cultivates a messy, washed out musical worldview all its own, one that hangs languidly over the record like a cloud of weed smoke. The spaced-out tone is set immediately on album opener “The World on Drugs”, which, after a mess of distorted noise, explodes into a fit of hardcore thrash. Other tracks pull back on the punk rock fury in favor of glazing over the album’s mood. “Bumpy Road” sounds like a tweaked-out twilight ride, a feeling that’s accented by the echoey paranoia in frontman Ryan Rousseau’s vocal delivery.

Much of Deep Trip balances between layered noise rock (“God Trip”) and drug-fueled ambience (“Control The Light”), and it’s a combination that yields odd but provocative results. The arid sands of the southwest might not be the most fertile, but over the course of eight tracks of expansive noise jams, Destruction Unit find a way to make that ground bear strange but rewarding musical fruit.

Essential Tracks: “The World on Drugs”, “Bumpy Road”, and “Control The Light”