Elvis Costello and The Roots – Wise Up Ghost 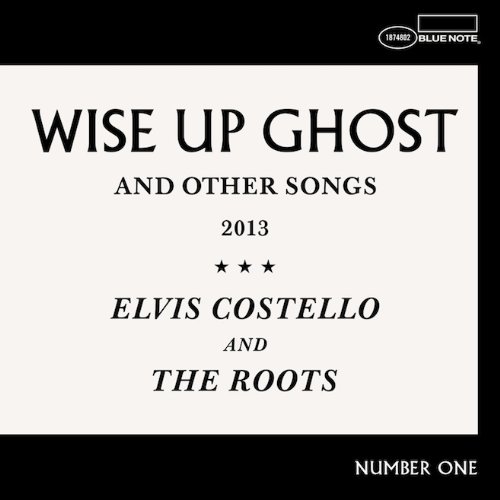 At the risk of giving away too much too soon, there’s one thing that listeners need to know going into Wise Up Ghost: This is not an Elvis Costello hip-hop record. Costello has never before put listeners in a position to speculate about his hip-hop credentials, but upon the announcement that the pop music maverick was rubbing shoulders with The Roots, fans and critics jumped to what seemed to be the most logical conclusion.

And, truthfully, the idea wasn’t that much of a stretch. Costello has spent time all across the sonic map over the past 35 years, surprising listeners at just about every turn. His bookish, bespectacled exterior coyly hid the punk boiling beneath the surface on My Aim Is True and This Year’s Model. From there, he only further developed his encyclopedic pop muscle, demonstrating his flair for soulful party starters (Get Happy!!), hook-laden pop savviness (Punch The Clock, King of America), New Orleans Jazz (The River In Reverse, recorded with Allen Toussaint), and bluegrass and country (Secret, Profane and Sugarcane, National Ransom). A true musical renaissance man, it seems that he can really do anything, a fact that’s even more noteworthy considering his proven willingness to do just about everything.

So, yeah, why not take a stab at hip-hop? The genre seemed to be one of Costello’s last unconquered musical frontiers heading into Wise Up Ghost. Maybe the detour was inevitable. But, like everything else in the singer’s lengthy catalog, the record skillfully dodges expectations while still offering something fun, fresh, and soothing in its unique world. The record is less indebted to hip-hop as it is to other pre-hip-hop styles, like jazz fusion and ’70s funk in the vein of Sly Stone and the Meters. The way Costello and The Roots meet in the middle to reach those tasteful sounds validates the collaboration between two factions who seemingly couldn’t be further apart. But, while it was almost impossible to imagine what to expect from an Elvis Costello/Roots studio session, the results exhibit a surprising commonality between both parties. “Just because you don’t speak the language, doesn’t mean that you can’t understand,” Costello opines on the wonderfully mellow “Tripwire”. That might perfectly explain the nature of his kinship with The Roots: They may come from different backgrounds, but there’s enough common thread to string them together.

“Walk Us Uptown” opens things by bringing Costello into The Roots’ tightly rhythmic, soulful fold. Horns pipe up in all the right spots, while Questlove’s reliably steady, yet intricate drumming leads the charge. Conversely, The Roots give in nicely to Costello’s pop sensibilities on the lush album closer “If I Could Believe”. More often than not, however, Wise Up Ghost finds both acts splitting the difference nicely.  “Sugar Won’t Work” finds a real musical balance, as Costello shades the song in pretty pop colors over a flavorful ’70s groove. “Refuse To Be Saved” draws healthy inspiration from the cranky funk fusion of Bitches Brew, while “Stick Out Your Tongue” casually lays back on Costello’s hyper-literate pop musings for one of the record’s most nod-inducing tracks. There’s a generous give-and-take attitude to the record, where Costello and the band each take what they need from the other and put the best pieces together to make an altogether different musical whole. Costello’s never been this funky, while the Roots have never sounded so much in their pop element. Neither could have made this album on their own.

It’s hard to recall a record in recent memory that pays such rich rewards off of so much heightened suspicion and curiosity. Wise Up Ghost is a winner, buoyed by how well it makes fools of those (this reviewer included) who dared try and pigeonhole it at face value. It may not be quite the meeting of musical minds that fans and critics had anticipated, but that just makes it better.

Essential tracks: “Sugar Won’t Work”, “Stick Out Your Tongue”, and “Refuse To Be Saved”