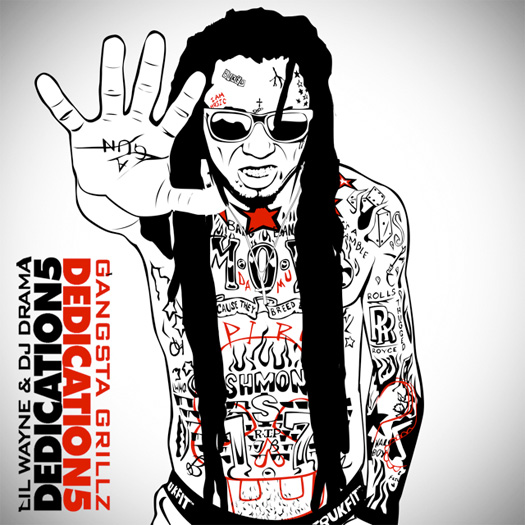 In the last year or so, I’ve spent plenty of time wondering what happened to the almighty Lil Wayne. Just a few years ago, when Wayne said he was the best in the world, he had the catalog and the personal intensity to back that up. Thanks in part to recent health issues and an interest in non-rap hobbies, Wayne’s career arc has been gradually nosediving.

It’s been a ceaseless, often agonizing cycle of underwhelming albums, most notably Tha Carter IV and I’m Not A Human Being II, underscored by questionable public displays that alternate between pure idiocy and desperate cries for attention.

But then, last week, Wayne took to Twitter to do something remarkable: blame himself for his lack of nominations at the VMAs, busting out the virtual whip for a mea culpa to atone for all the terrible, uninspired things he’s done of late. And with that admission comes the latest entry in the now iconic Dedication series, another high-profile effort where Wayne talks shit and raps over beats from Jay Z, Kanye West, and Kendrick Lamar.

While he hasn’t delivered another Dedication 2, Dedication 5 shows that Wayne may be on the path back up to Olympus.

But, as with so much of life, you can’t have the good and the revelatory without the asinine and unsettling. On the less offensive end, that involves Wayne’s take on Ace Hood’s “Bugatti”, where “I woke up in some new punani” is only outdone by the lyrical clusterfuck, “I was drunk as a bitch, drunk as a bitch/ But not drunk as that bitch.”

Slightly more offensive is when Wayne tries to be clever and stumbles, as is the case with “Still Got The Rocks”. Sure, there are subtle gems (“dirty money, no footprints in dirt”), but seconds later: “I can’t trust my iPhone, I think Siri the feds,” which makes Wayne’s paranoia only laughable. But perhaps the worst entry is “Itchin”, with lyrical crimes as twisted as they are plentiful (a personal favorite is “clean the puke off of the toilet bowl/ treat the pussy like revolving doors”).

With all that terrible, awful stuff just pouring out of the speakers, it gives Wayne a chance to vent and expunge his system. And, after everything he’s gone through, there’s got to be loads of garbage in Wayne’s belfry, and getting it all out has never been more crucial to his continued success and well-being.

When Wayne tackles two big tracks in Kanye West’s “New Slaves” and Drake’s “Started From The Bottom”, the results aren’t as groundbreaking, which seems like a failure in the grand scheme of a Dedication. But, within that, Wayne has reawakened his passion, coming off like the Weezy of old, a man angry, hungry, and ready to karate chop the competition. For now, these may only be light pokes, but they’re better than skateboarding off into the sunset.

Tunechi takes it to the next level with Jay Z’s “FuckWitMeYouKnowIGotIt”. Here, his ability to vibe with a beat is at its most efficient, reacting to the extra-menacing bass with visceral angst. The rhymes may veer from bleh (“You ever see me broke?/ Write on my cast”) to boss (“Money talks, yours like no comment”), but Wayne owns the beat thanks to some real piss and vinegar. Any sign of life these days is a cause for celebration.

But, by sticking to the “just record every goddamn moment” approach, Wayne often spins gold from seemingly trashy or obscure components.

“Thinkin About You” may be Wayne’s weirdest song to date (and this is the guy who recorded “I Told Y’all”). It’s this bizarre jumble where Weezy raps like he’s back in the Hot Boys and then tries singing (sans Auto-Tune) like he’s Luther Vandross, all over this beat of handclaps, xylophone, and Mardi Gras horns. It works magnificently because it’s unequivocally Wayne: weird, jarring, and totally nonsensical. If anyone else attempted it, they’d laugh themselves right out of it. Wayne’s just nuts enough to make it shimmer.

While “You Song” isn’t as overtly odd, it’s definitely one of the most intriguing cuts Wayne’s included on a mixtape. While he’s already gotten the whole perverted gangbanger thing down, he’s struggled for years with finding a way to be emotionally relevant (which usually ends up sounding like Rebirth). But here, Wayne weaves a story about avoiding the “I love you” conversation with surprising wit and nuance (“And when she figure out that she been swindled/ I’ll be cleaning that lovebird shit off my window/ I-I-I love you too…”).

In just a few words, Wayne lends all sorts of gravity to claims that he wants to get better and to do away with the laziness, fear, and negativity of recent years. He’s got a long way to go before he’s ever the Best In The World again, but he’s nothing if not totally, totally… committed. Good to have ya back, Mr. Carter.

Essential Tracks: “Thinking About You”, “You Song”, and “FuckWitMeYouKnowIGotIt”