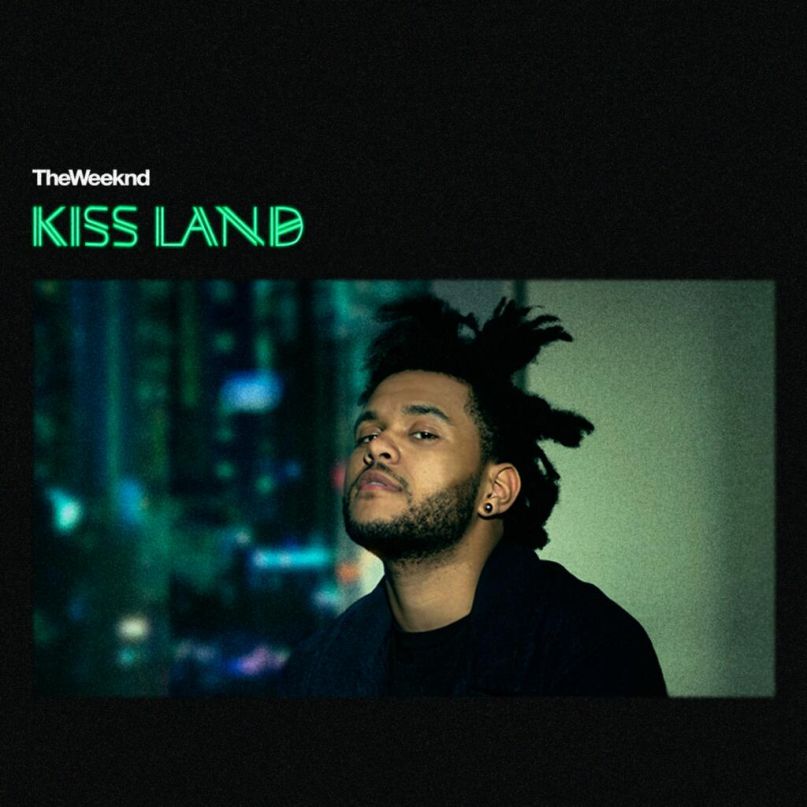 Abel Tesfaye is an R&B singer  which is to say, hes a proprietor of a genre at least somewhat image-dependent, if we’re to believe there’s any significance in all the sensual dancing and bare, well-oiled torsos plastering so many of the genre’s iconic album covers. So, despite his original intentions to skirt the less desirable attendant aspects of success by remaining borderline anonymous, Tesfaye has since come out of the woodwork, his first interview finally arriving just a couple of months ago.

On Kiss Land  Tesfayes first for-real LP as The Weeknd, even though its preceding mixtapes (House of Balloons, Thursday, and Echoes of Silence) were three of 2011s best-sounding full-lengths  the Toronto resident comes into focus clearer than ever, occasionally sounding as though he’s ready to chase the superstardom achieved by his idols R. Kelly, Michael Jackson, and Prince. This is mostly a good thing, and its the trait that reverberates most once the 56-minute album is over. Missing is something as achingly melodious as House of Balloons The Morning, but there are indeed doses of pop brilliance to be found here, and the most potent of them come in a row.

Second single You Belong to the World, which may or may not sample Portisheads Machine Gun but is driven by a machine-gun drum pattern all the same, runs on a positively Bruno Martian energy that Tesfaye has mostly avoided in the past. Immediately following is Live For, in which casual hedonism sort of nudges you to turn it up and a Drake verse is the latest evidence that Drizzy is on a serious roll going into Nothing Was the Same (“They know my story, flaws and all/ I still got plaques hanging wall to wall”). Completing this vibrant trio is the florid disco of Wanderlust, which splits the difference between peak-era MJ and Passion Pits gossamer bloom.

Nevertheless, Tesfaye’s much-noted shadiness figures in prominently here, and it can either be a burden or a source of moralistic conversation. He still wears the lothario badge too proudly, his boasts can fall flat (Me and my niggas, we aint never going broke), and sometimes his horniness leads to overeager groaners (The only thing youre taking is your clothes off”). But, more often hes playing up that persona, often vividly so in its excess and nihilism: Goddamn Im high/ My doctor told me to stop/ And he gave me something to pop/ I mix it up with some Adderalls and I wait to get to the top.” A few moments of self-loathing do add a bit of human dimension to Kiss Lands world, too (from “Pretty”: You said you fucked another man, finally/ I knew this day would come), although the mocking tone with which he delivers them doesnt exactly call for compassion.

Musically, Kiss Land is filled with lush textures that evoke Jamie xxs glaciated compositions at their quietest and rival todays most ubiquitous R&B in grandiosity. Illangelo and Doc McKinney, the chief architects behind Tesfayes trilogy of mixtapes, arent here, but Kiss Lands producers (names like DannyBoyStyles, DaHeala, and Silkky Johnson, none of them better-known than Illangelo or McKinney were when House of Balloons dropped) did a worthy job of recreating their predecessors’ booming, though diaphanous aesthetic.

Only once does Kiss Land burst into a vaguely experimental form, that being when the horror movie screams of the title track bubble up as something altogether spookier than the average R&B single. But while Kiss Lands songs are slightly longer on average than those of the aforesaid trilogy, theyre even more expansive structurally, building, eventually dissipating, and then relaunching. Kiss Land falls short in the innovation category, as it never quite feels like Tesfaye’s work here will generate new waves of creativity in his field (theres no denying that Tesfaye’s earlier material has influenced R&B arrivistes, such as Ty Dolla $ign and the OVO signee PARTYNEXTDOOR). But, apart from its mild lyrical slips, Kiss Land doesn’t really have any cosmetic issues, just relative shortcomings when you consider the singular thrills his 2011 output offered. The 23-year-old Tesfaye will almost certainly make a bigger, better record soon. For now, Kiss Land works fine as one of the year’s most fearless pop releases.

Essential Tracks: You Belong to the World, Wanderlust, and Kiss Land