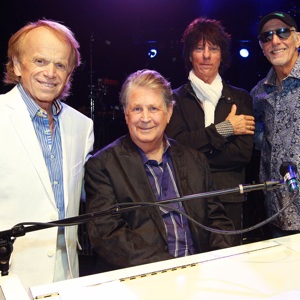 The burden of brilliance has broken many a genius. Of the troubled and exalted individuals to impact the music world, Brian Wilson’s career has provided what is without question one of the most captivating, and ultimately sad stories, to grace the annals of music history. The Beach Boys’ luminary oracle of composition has weathered the abuses of the recording industry, the nefarious intentions of what had been a trusted inner circle, and his own mental instability over the course of a career that has yielded inarguably some of the most important music ever created.

Wilson, now 71, spent 2012 taking part in what was the most authentic reunion of the original Beach Boys since his initial departure from the group and it appeared the chasmic rift that had been caused by Mike Love’s well documented transgressions against human decency had been forgiven by cousin Brian. The reunion saw the release of a new record — a great record, at that — but ended with Love unceremoniously firing Wilson, Al Jardine, and David Marks with a press release and going on to take his own version of “The Beach Boys” on tour, instead. Wilson’s statements at the time indicated that he was blindsided by Love’s decision, and for an erratic individual with a history such as Wilson’s, the situation held the potential to be catastrophic beyond the untimely sacking of the proper Beach Boys.

Fortunately, Wilson, with Jardine and Marks in tow, has returned to the spotlight with the help of an unexpected champion in British guitar legend, Jeff Beck. It was announced that Beck would be collaborating with Wilson on an album of new material, and that the two would do a tour together.

The pairing could be easily misconstrued as an awkward misstep; however, Wilson and Beck are not as far removed as one might expect. Aside from a shared love of classic Americana — particularly an affinity for traditional hot rods — Beck and Wilson have both spent the better part of their careers defying hyperbole in their own altruistic hunts for unique harmonic content. Truly, Beck and Wilson are both transcendent keepers of melody. Regardless of the sonic content, the union is an unprecedented collaboration between two of the most brilliant musicians of the past 50 years, and perhaps one of the last times any of us will see Brian Wilson perform.

The tour kicked off last night in Hollywood, FL at the Seminole Hard Rock Casino. A standing ovation welcomed Wilson as he settled into a seat behind a white grand piano. The broken drums of “Do It Again” opened the show and gave way to an absolutely massive sound provided by the 11 piece band that included five guitarists, a percussionist, two keyboardists, drums, bass, and even a guy to play various woodwinds. Wilson was firmly bolstered by longtime foil Jeffrey Foskett, who also provided the high harmony vocal that’s essential to the Beach Boys’ oeuvre. The elaborate instrumentation brought the songs to life in a way that remained true to the albums, but with an urgency and bombast only a band that size can attain in a live setting.

Wilson’s stage presence was muted, as expected, and may have been mistaken for disinterest in the performance. However, throughout the set, Wilson displayed his odd sense of humor and good spirits (“Jeff Beck is resting now. He’ll be out later. He had to take a little nap.”) and later introduced what might be the most somber pieces of music ever written (“In My Room”) with an ironic joke (“Here comes a hard rockin’ song, alright? This one is gonna rock!”). Jardine’s warm interactions with the crowd were a welcome distraction from Wilson’s general lack of interest in onstage pleasantries.

Any questions about Wilson’s ability to perform were silenced when he led the epic “Heroes and Villains”, which saw his voice betray the tepid image of a 71-year-old-man sitting listlessly behind a piano. The set included a special appearance by former Beach Boy and longtime member of the Rolling Stones’ touring band, Blondie Chaplin, who gave a rousing performance of his signature song, “Sail on Sailor”, with the band. Overall, the Wilson set brought justice to the Beach Boys’ catalog in the form of an honest celebration of the music — the antitheses to Love’s traveling mockery of the band’s history.

Following Wilson’s exodus, Beck and his band appeared shrouded in darkness and a cloud of notes signaled the start of “Eternity’s Breath”. The initial entrance made clear that the audience was evenly divided between whom they had come to see, with a sea of cell phone screens capturing the guitar masterclass Beck was giving. Beck rarely commits to a band for long and this show marked the introduction of yet another group of players, with Jonathan Joseph on drums, Lizzie Ball on violin, Nicolas Meier on guitar, and Rhonda Smith continuing in her role as bassist from recent iterations of the Beck band.

Beck has always succeeded where other instrumental guitarists fail in occupying the attention of non-guitar fans while remaining the guitar hero’s hero. The early portion of the set was an awe inspiring display of Beck’s uncanny ability to channel emotion through a guitar in a manner that’s as expressive as any human voice, and though there was a natural swagger and bravado to Beck’s performance, there was never a moment where it appeared to be an exercise of the ego. Rather, Beck spent the evening striving for greatness in a search for expression, visibly encouraging his band members to ride the edge of control and find the line.

Suffice to say, the guitarist lost a few Beach Boys diehards amid the athletic bends and whammy bar theatrics that marked the early half of his set, however, between a rendition of Hendrix’s “Little Wing”, (which brought a nearby audience member to actual tears), an emotionally wrought take on the Beatles “Day in the Life”, and a reading of Les Paul and Mary Ford’s “How High the Moon”, (expertly sung by Lizzie Ball and Jeffrey Foskett), Beck’s counterpoint was a welcome one, if not the most congruent to the lush harmonies and pleasant vibes Wilson and Co had just provided.

The collaborative part of the evening delivered in spades upon the promise of such disparate luminaries coexisting in the same musical space. The elaborate harmonies of “Our Prayer” provided a prelude to “Surfs Up” as Wilson, Jardine, Marks, and Foskett (along with a smattering of assorted Wilson band members) joined Beck and his group on stage. “Surfs Up” was the watershed mark of the night. To hear Beck’s dynamic, vocal guitar playing in the context of the Wilson opus — one that was almost never heard at all — was a historic moment, and one that forced us to reevaluate how we perceive emotional content in music. There was an electricity present during the collaboration that defies explanation; the moment was singular, transcendent, and time seemed to stop for the duration of the song.

The night ended with both bands being brought back to the stage for a collaborative encore. What began as a tentative jam fell apart briefly — something entirely forgivable by the fact that there were nearly 20 people on stage feeling their way through the first night of a tour — however, Beck saved the performance with a ferocious assault on “Space Boogie”, leading the conglomerate band through a final bout of guitar histrionics before segueing into “Barbara Ann”, “Fun Fun Fun”, and a final, heart-wrenching farewell with the traditional “Danny Boy”.