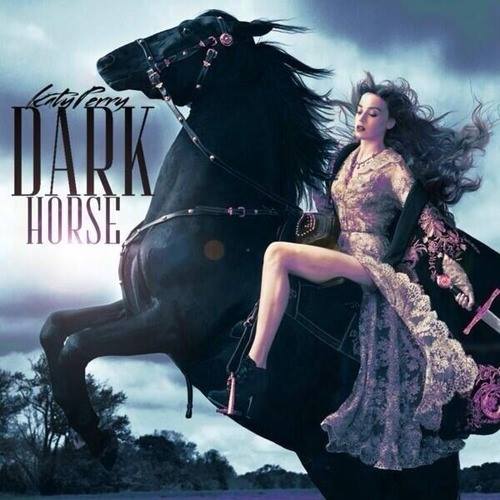 With every move made by Lady Gaga, Katy Perry has one to counter. Just as Gaga’s ARTPOP will feature a rap song, so too will Perry’s Prism. Only she’s done Gaga one better, recruiting Juicy J for some ol’ fashioned trap music.

“Dark Horse” was produced by professional hitmakers Dr. Luke and Max Martin, and though Perry doesn’t actually rap on the song (Juicy J handles that part), she does sing over top high-pitched synths and drum loops. On first listen it’s not as immediately grabbing as lead single “Roar”, but Perry has the luxury of taking a few risks following eight number one singles.

The song is available for download to anyone who pre-orders the album on iTunes.

In an interview with MTV, Perry described the song as a “witchy, spell-y kind of black magic-y idea. It’s kind of a juxtaposition. It’s got me, a pop artist, with a little bit of an urban kind of hip-hop-flavored background soundtrack to it, and the lyrics are kind of witchy and dark, as if I was a witch warning this man not to fall in love with me, and if you do know I’m going to be your last.”

Prism is due out October 22nd via Capitol Records (pre-orders are ongoing).

And if you still haven’t, be sure to check out Michael Roffman’s new essay examining the return of Perry, her rivalry with Lady Gaga, and the state of pop music in general.