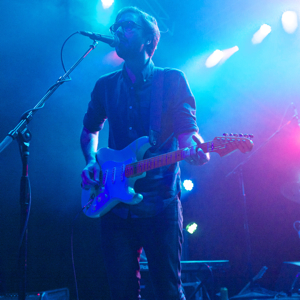 Suburbia is rarely romanced in indie rock. When it’s talked about at all, it’s done disparagingly with requisite angst (see: Arcade Fire’s 2010 opus). Then there’s Real Estate, whose sound’s been celebrating the area’s supposed vapidity since they strolled out the gate in 2009. On Thursday night, however, the New Jersey quintet was comfortably at home at The Observatory in Santa Ana, CA, which wasn’t exactly a surprise given that their two albums’ worth of material has always felt suited for quiet, beach town drives. They’re like a Pavement for teenaged millennials, only surprised by the beauty of sleepy strip malls rather than maligned.

“Beach Comber”, the opening track of their 2009 self-titled debut, unzipped the night with ease. For a crowd filled of young Orange County surfers, the irony seemed to go completely over their heads. Their beachiest song is a celebration of what happens on the sand not on the water, a celebration of the grainy and mundane rather than the baptism into hipsterdom might have sought out. A cursory glance of the crowd revealed a freshman-in-high-school to freshman-in-college demographic, still in the stage of band worship as opposed to band appreciation. When openers Thee Rain Cats came into the crowd, these kids flocked around them as if touching the hem of their denim jackets would heal them of any and all insecurities. Growing up in Orange County will do that to you.

Real Estate mastermind Martin Courtney admitted to being in the process of getting over a cold and his voice started to show some wear-and-tear as the evening progressed. Still, it was never distracting. Bassist Alex Bleeker socialized with the crowd during and after the show and the audience even sang him “Happy Birthday” during their encore. Upon catching him in the parking lot, he said wryly, “I have to confess something to you guys. It’s not my birthday. We told everyone it was Martin’s birthday last time we had a really good show so we figured we’d just do it again with me. So even though it’s not my birthday, it still means we were having a really good show!”

Bleeker’s persona is wonderfully indicative of the band’s ethos. Where so many of their fans are filled with anxious pretension, he’s unafraid to admit “‘Shoot the Singer’ as his favorite Pavement track. “But that’s my obscure pick,” he admitted. “‘Range Life’ is really up there too.” Almost immediately after the show was over, he was in the crowd shaking hands and smiling ear to ear. Part of growing up in the suburbs is venerating inaccessibility. The city is far away and so is genuine credibility. It keeps the mystery and hope alive, the idea that the reason street cred fulfillment hasn’t happened yet is because it’s far away and untouchable. Bleeker’s accessibility and friendliness is startling in such a context but largely indicative of the band’s entire mantra: where you are is all you are, there is no secret recipe. So be a nice dude and relax.

A healthy portion of the night was dedicated to their aging sophomore album, 2011’s Days. Though, a few tracks off what will undoubtedly be its follow up charmed audiences, too. They didn’t exactly hint at an evolution of their sound, but a deeper exploration of their present. Later, Bleeker attributed any aural differences to their age and maturity, which admittedly is sort of a “duh” comment, but also an amicable place to find a revered act going into a third album. But that’s all next year — even if a single could pop up by year’s end, he indicated. In the meantime, he was more thrilled that his side project, Alex Bleeker & The Freaks, had an entire weekend to enjoy Southern California. He even invited folks to the shows like they were longtime friends.

The future’s looking comfortable for Bleeker’s creative outputs. It’s doubtful Real Estate’s new record will be a quantum leap into the future, but that’s never been their thing. Instead, it hints at another rallying whimper to consider today your tomorrow because — suburbs or not — wherever you go, there you are. Laugh it up, or take comfort in it… it’s your choice.