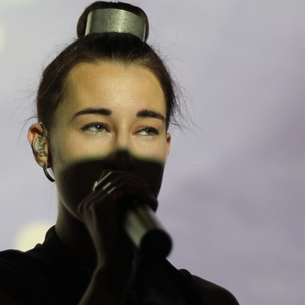 Concert attendees can be so obnoxious that the act of seeing a favorite artist live is sometimes more of an annoyance than a thrill, thanks to incessant chatter and smart phone usage, with Los Angeles being an early adopter of this plague. Despite this regrettable trend, the sold out crowd for Zola Jesus’ early show at Hollywood Forever’s Masonic Lodge remained in pin drop mode throughout the set, as if shocked into a silent awe. Between the intensity of the voice behind Zola Jesus and the setting of the evening, an intimate temple filled with enough Masonic symbols to keep a conspiracy theorist occupied for hours, any reaction but reverence would have been a blasphemous anomaly.

Zola Jesus recently re-imagined some of her best songs with industrial pioneer J.G. Thirlwell and Mivos Quartet on Versions, and onstage, those new takes proved to be the definitive ones. Before adopting the Zola Jesus stage name, Nika Roza Danilova trained in opera, which resulted in a voice that’s not just “big” but formidable. Zola Jesus previously thrived on the tension between her vocals and moody electronics and distorted guitars, as if she were singing against them, but at the Masonic Lodge her signature timbre soared to even greater heights and a Heisenberg-level of purity, dropping jaws throughout the night, such as when as she wailed “Do you really know?” on “Sea Talk”.

Accompanying Danilova was Thirlwell himself behind the altar, bringing the elegant madness of their collaboration to life as he conducted a string quartet with one arm while triggering electronic samples with the other. Although the Masonic Lodge is not an ideal setting for climbing or crowd surfing, Danilova’s signature timbre was still accompanied by a physical theatricality. These restrained dramatics included curling into a ball at the start of “Collapse”, a singing stroll through the aisles, and an occasional breather while seated in one of the side stage thrones.

Following the cascading, string storm climax of “Fall Back”, Danilova and company took a bow at the front of the crowd to a standing ovation before departing the room. Groans ensued as the house lights returned, indicating that a planned encore was not in the cards, but this turned out to be a false alarm as the stars returned to stage for a redo of set opener “Avalanche” that was slowed down to a tear-inducing delicate beauty. The set may have only been an hour in length, but anything longer for such an emotional roller coaster would have been too intense.