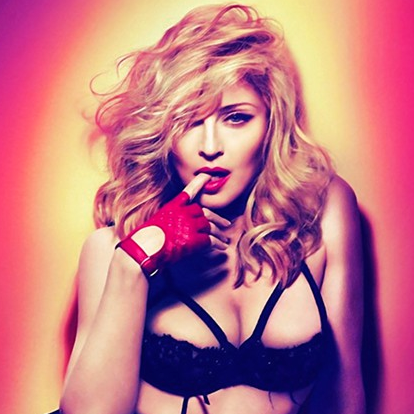 Someone tap Thomas Bangalter and Guy-Manuel de Homem-Christo’s shoulders — Madonna’s waiting for their call. Yesterday, the Material Girl took part in an AMA on Reddit, where fans discovered she not only owns a penis-shaped bong, dreams about Brad Pitt, and loves to vacuum, but also wants to work with Daft Punk.

“I would love to work with Daft Punk,” Madonna wrote, adding: “just waiting for them to return my call.” And for what? Perhaps a follow-up to 2012’s disappointing MDNA, as she also hints of an album for 2014, writing: “there might be…my creative juices are flowing…”

However, those holding out hope that she’ll ever record a “full-on rock album” will be disappointed to find out her answer is a “full-on no.” Instead, she’s more open to the idea of revisiting, say, Ray of Light and reworking it as an orchestral or acoustic album.

To top it all off, she also wishes she could turn Frank Ocean straight. Don’t believe us? Read the entire (highly entertaining) discussion here.

In other news, Madonna has announced the release of a new 17-minute short film entitled, secretprojectrevolution, which will be released for free through Bittorent on September 24th. It marks the beginning of her Art for Freedom initiatives, “an online global initiative to further freedom of expression.”

Co-director Steven Klein described the film as an examination of “our private prisons. It questions what we do, how we do it and how we treat others. It questions our governments, and our collective thought patterns. Think about it – the power of art can lead to peace.” It comes complete with bonus content, including still photos, trailers, and an exclusive interview with the pop singer.