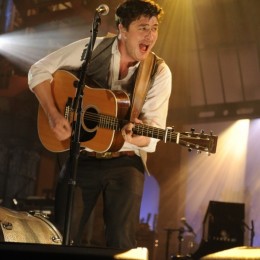 Mumford and Son have embarked on a hiatus following last night’s final scheduled tour date in support of their sophomore album, Babel.

In an interview with Rolling Stone, keyboardist Ben Lovett confirmed the band has no activities planned for the “foreseeable future,” adding, “We just know we’re going to take a considerable amount of time off and just go back to hanging out and having no commitments or pressure or anything like that… I don’t think we’ve had actually much time in the process to be with other people and living a life outside of the band. I think that’s what’s in place at the moment, to do very little – especially when it comes to Mumford & Sons.”

The band has been touring relentlessly behind Babel since its September 2012 release. In June, they were forced to cancel several dates, including their headlining appearance at Bonnaroo, after bassist Ted Dwane needed emergency surgery to a remove a blood clot from his brain. However, they returned to road in time for their slot at Glastonbury in July.