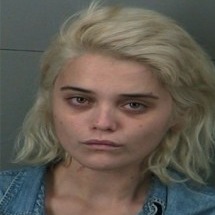 Earlier this month, Sky Ferreira and DIIV, a.k.a. Zachary Cole Smith, were pulled over while driving in Saugerties, New York, arrested, and charged with a number of offenses, including drug possession and stolen property. Smith has already taken to Twitter to deny the allegations, writing, “what you’re reading is a police blotter, not the outcome of a court case. These cops wanted to fuck us, and they did. Sky did nothing wrong.” Now in an interview with Billboard, Ferreira has discussed the incident (like Cole, she believes the police were intentionally targeting the couple), coping with the fallout in an Internet age (“The one thing I think that bothers me the most is people being self-righteous about it and not knowing what they’re talking about”), and how she knows she doesn’t have a problem with drugs (“I would be in rehab; I would not be on this Vampire Weekend tour. And I wouldn’t be able to go on stage everyday and deal with this”).

How did you handle reports of the arrest being leaked? That couldn’t have made things any easier.

It was a lot harder because people don’t really know… I legally can’t say much about what happened, but it’s not what it all seems. I kind of got fucked with. And it’s annoying because I wasn’t charged with his heroin. It says it. The public records are out there. I wasn’t charged with it. Trust me, if I was even anywhere near that, they would’ve charged me because they had no problem charging me with other shit. They were out to kind of like fuck with us. I’m scared to say more than that because I don’t want them to arrest us anymore. I’m not saying they went out of their way to fuck with us, but like what happened wasn’t… No one actually knows what happened besides Cole and I and the Saugerties police.

And I’m trying to let the music speak for itself. And I go and meet people and you can tell that I’m not on drugs. And I’m not gonna blame it on anyone else. I’m sorry for what happened. I’m sorry if I offended anyone by it. But also I feel like I was a bit exploited by my friends. I couldn’t believe some of the things they were saying and doing. In some ways it was like a blessing in disguise because I really saw who was there for me and who wasn’t. And I saw some really great things from people who I didn’t expect that to come from. I’m really sorry about it, and that’s pretty much all I can say.

It’s hard that every day now I have people calling me a heroin addict or making fun of me and saying that I’m gonna die of AIDS from needles and shit like that. The one thing I think that bothers me the most is people being self-righteous about it and not knowing what they’re talking about. Read what it says. People are being really hypocritical about it and just using it as a way to mock us. I don’t like the way people are treating me and Cole. If I thought someone had a problem, I would help them, I would want to get them help. I wouldn’t just make fun of them or attack them or use them as a way to get publicity for myself. Especially when it comes to people that know us and know the truth about it. I’m not telling people to feel sorry for us, but use it as a way to get people help instead of trying to embarrass them more.

Even when Lindsay Lohan and people like that got arrested, it’s like it doesn’t concern me, you know? That has nothing to do with me. Hopefully that person gets help— that’s the way I’ve always looked at it.

They don’t know what’s going on. This is right before I played Barclays Center [with Vampire Weekend and Solange]. It’s funny. I have to point this out, too— If I’m surrounded by handlers, which is all I’ve been hearing for the past year since “Everything is Embarrassing” came out, then I would be in fucking rehab right now [laughs]. I would have had some public statement about it.

I know for a fact I’m not a drug addict. That’s all I really have to say about it. I know I’m not a drug addict. I’m sorry if it hurt anyone and I’m not trying to promote drugs and it’s not like an image thing whatsoever. Do you think I want people thinking I’m a heroin addict? No. Do you think I want people thinking I’m a drug addict? No. But people have always said I’m a drug addict, just based on the fact that I have dark circles around my eyes— which I’ve had since I was a kid— or because I come across a certain way or dress a certain way. So that’s not something that’s new. But I would be in rehab; I would not be on this Vampire Weekend tour. And I wouldn’t be able to go on stage everyday and deal with this.

But there are people who have been really nice and supported me and I feel good about that. I’ve learned a lot from the experience and I feel stronger from it. I’m sorry if it seems like I’m trying to promote drug use or something because I’m not. But I’m a human being and people get involved in bad situations some times. That’s really all I can say.