TV on the Radio perform on Letterman, Dave loses his mind 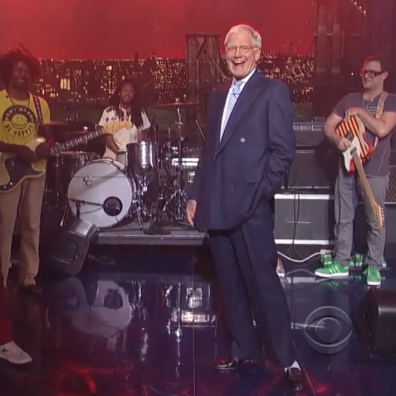 TV on the Radio appeared on Late Night with David Letterman last night to showcase their new one-off single, “Mercy”. Need a barometer for just how great of a performance it was? Take a look at Dave’s reaction (this is an actual transcription):

[To Dave Sitek] Nice going! Wow! How bout that! Yes! TV on the Radio! [Pointing to drummer Jaleel Bunton] How bout that kid, right there! What do you think!?!? Oh my god! How bout this guy?!?! Fantastic! [To Tunde Adebimpe] Thank you so very much! Great pleasure to see you! “Mercy”, thanks for watching!

Wanna have even more fun? Compare this reaction to his one for MGMT’s latest performance.

“Mercy” is one of two singles TVOTR has released since leaving Interscope Records and the traditional album cycle behind, opting instead for smaller releases through bandmember David Sitek’s Federal Prism label. The other single, “Million Miles”, saw a video released along with the song premiere.