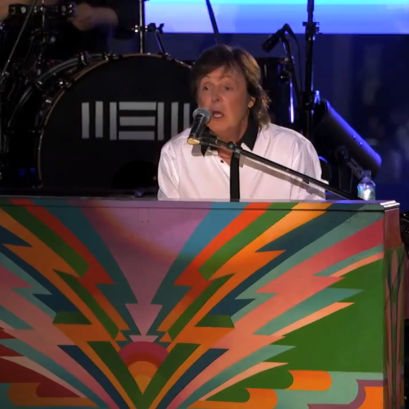 Fresh off Las Vegas’ iHeartRadio Music Festival, Sir Paul McCartney conquered the streets of Hollywood last night with a full 15-song performance that coincided with his appearance on Jimmy Kimmel Live!. The former Beatle performed a set that included The Beatles (“Magical Mystery Tour”, “Let It Be” “Hey Jude”), Wings (“Junior’s Farm”, “Band on the Run”), and his new solo material (“New”, “Save Us”, “Another Day”). Watch the full replay at MySpace.

However, only two cuts appeared on the actual broadcast — both “New” and “Lady Madonna”. McCartney and Kimmel even had a little chat prior, where they discussed The Beatles, McCartney’s own anxiety, his new album, and more. Replay those clips below.

McCartney’s forthcoming studio album, New, hits stores in the US on October 15th (and elsewhere on the 14th) (Pre-orders are ongoing.) Meanwhile, Kimmel will deliver even more late night magic when he welcomes Justin Timberlake to his show Tuesday night.