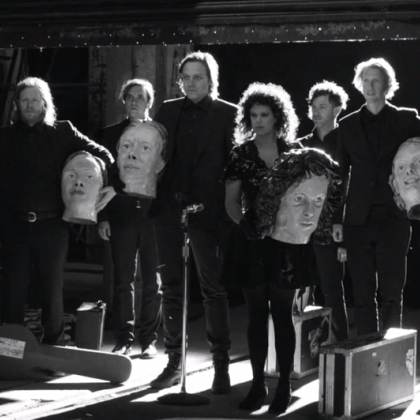 A single this big deserves two videos and thus, hours after Arcade Fire revealed the interactive short film for “Reflektor”, they’ve dropped another set of visuals directed by famed filmmaker Anton Corbijn. In it, Win Butler warps his band into an oversized papier-mÃ¢ché head army, leading them into a world of darkness, shattered mirrors, and a forest of oddities. Whereas this morning’s video asked for your technology, this one begs for your deepest imagination. Watch it below.

As you’ve surely heard by now, “Reflektor” serves as the lead single to the band’s new album of the same name. The single does in fact feature David Bowie on vocals and was produced by former LCD Soundsystem frontman James Murphy. It’s available to purchase digitally beginning today and will be available on 12″ vinyl at select record stores. Meanwhile, the album will arrive on October 29th, and will be supported with an appearance on the season premiere of Saturday Night Live.