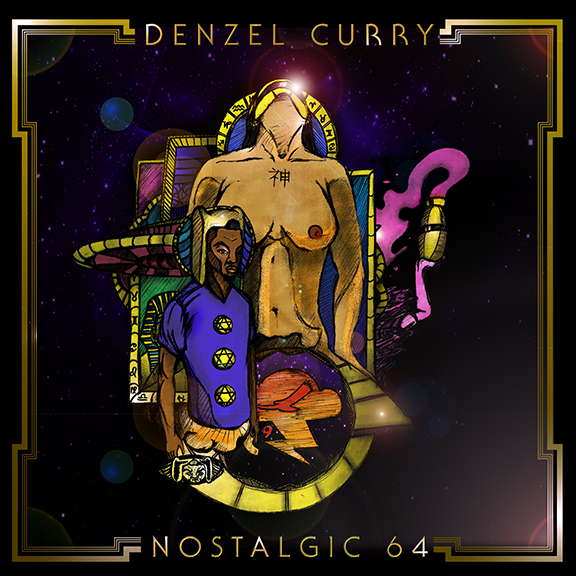 Denzel Curry delivers his words in great combative flurries because no other manner would be fitting – the 18-year-old rapper has about a million things he wants to say. Curry is from Carol City, FL, the hometown of Rick Ross as well as Trayvon Martin. Accordingly, the edifying Nostalgic 64, Curry’s debut proper, sounds like the work of someone who finds inspiration in both, or anyway in what they represent – Ross because he achieved his Lamborghini dreams through rap, Martin because he’s a symbol of our whole convoluted and imperfect legal process. “I’m lugubrious because I’m from a place where niggas always shootin’ shit and never on no Buddha shit,” Curry raps on “N64”, a line so inventive you almost miss its heart. Mostly, though, it’s tough to miss this album’s heart.

Along with guys like Yung Simmie and Robb Bank$, Curry is a fixture in the emergent South Florida underground, but he’s the one with the certified banger, “Threatz”. That song joins other trap-influenced tracks like “Talk That Shit” here, and Curry matches their intensity — or, as he puts it, “I’m mixing that Slayer with that 2Pac shit.” It’s a thrill just to hear him rap, bursting from the starting blocks of these songs with all the calculated grace of Usain Bolt. This is a rap clinic from a guy you’d think would still be learning the basics himself.

The keyboard melodies of “Benz” and the psychedelic swirl of “Denny Cascade” are the relaxed passages of the album, but they don’t aspire to the emotional palette of the sedative (but not entirely soothing) “A Life in the Day of Denzel Curry Pt. 2”. Here’s a song that’ll stop you in your tracks. In a breathless singsong flow, Curry memorializes a murdered friend and another he lost to suicide (“And my nigga William had his last trip when he hung hisself in his room”). “Life’s no game,” he repeats during the haunting final two minutes. Alternately immersed in his own dreams and in the throes of his nightmares, he sounds like he knows his purpose.