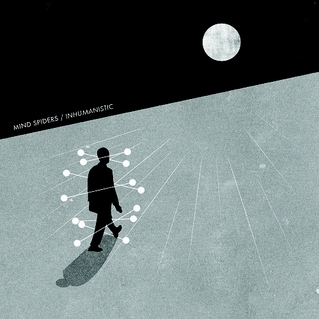 Another year, another Mind Spiders album. The garage punk project from Mark Ryan is becoming an annual affair after he disbanded his original act, The Marked Men, in 2010. The basic two-chord approach of the Men became limiting for Ryan, so he began adding synths and sci-fi lyrics to his songs, and Mind Spiders was born. The project’s debut and last year’s Meltdown toe the line between post-punk and Jay Reatard-inspired rock ‘n’ roll. Ryan’s musical aesthetics effectively reflected his lyrical conceits, but his songwriting could get repetitious with its minimal chord progressions and lack of distinct melodies.

That’s why Inhumanistic is a decisive album for Ryan. Like a ballplayer in his contract year, this was his chance to undo the faults of his previous records, to seize his fan base, to open up. It was imperative for Ryan to bring something new and different with Inhumanistic, and the A-side convinces you that he has.

Opening salvo “Inside You” and “Suicide” are hit-and-run punk songs with bouncy synths, right in Ryan’s wheelhouse. But, his voice sounds different — it has more color. His melodies have more twists and turns, his words remain bizarre and paranoid. On “They Lie”, Ryan even shows off some inspired lead guitarwork, bridging the chorus and verse with a nasty lick. He then croons to a drum machine on the lovely “City Stuff”. No Mind Spiders song has ever been described as “lovely,” but it certainly fits here.

Each record has been better than the last, Ryan clearly improving steadily as a songwriter. The heavier second half of Inhumanistic, while not as diverse and rewarding as the first four tracks, shows this growth. He slows down the constant Ramones two-chord onslaught, obscures his vocals in fuzz, and builds an atmosphere around his tales of strange love and extraterrestrials, justifying an extension to that contract.