Parquet Courts – Tally All The Things That You Broke EP 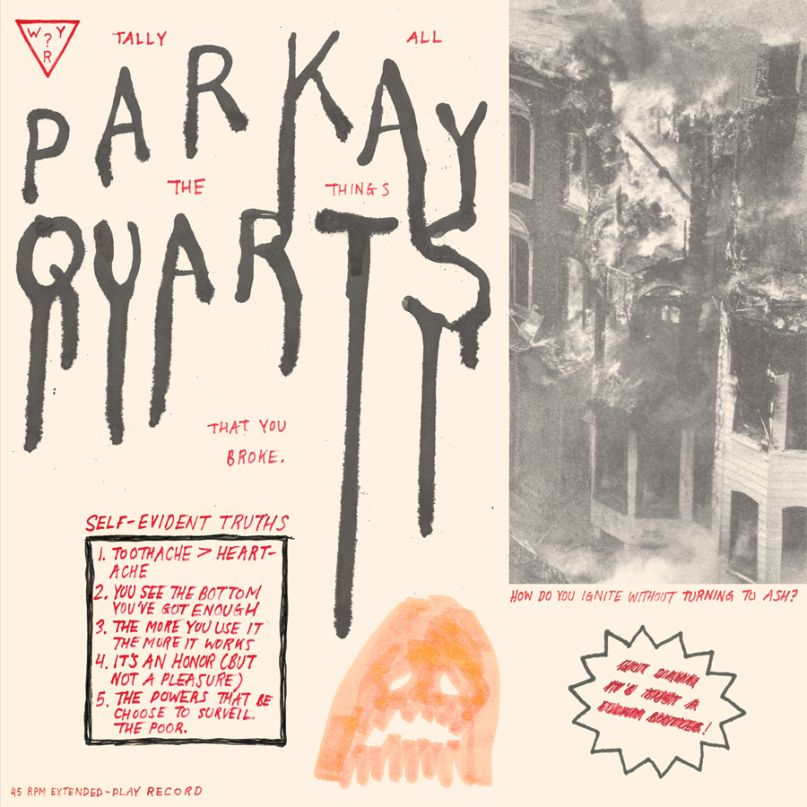 It’s not hard to figure out why three-fourths of Parquet Courts made the pilgrimage from their native Texas to New York City. Sure, Brooklyn has firmly established itself as an indie rock mecca, with more bands hanging out of windows in Williamsburg than there are people in the streets. But, beyond that, Parquet Courts’ music pays a huge debt to post-punk and New York’s rich, eclectic, and massively influential musical history. The band turned heads with last year’s Light Up Gold, which doled out skillful odes to the tightly-wound, hyper-kinetic sounds of bands like Taking Heads and Television, suggesting they were more committed to weaving themselves into the city’s musical lineage than many of their fellow musical transplants.

Arriving a little more than a year after their debut reintroduced ’70s art punk cool to fans of the indie rock new school, Tally All The Things That You Broke (snottily credited on the cover to the Parkay Quarts) doesn’t build upon Light Up Gold‘s strengths so much as re-utilize them, at least to start. The five-song EP begins down the same path of tense, trebled guitars, menacing punk attitude, and hyperbolic sing-speak lyrics. “You’ve Got Me Wondering Now” even opens the proceedings with the same familiar downstrokes that graced the opening seconds of Light Up Gold. But, there are also some curious turns into other genres. “Fall On Yr Face” employs some studio trickery over a bluesy, paranoid guitar line, and then there’s “He’s Seeing Paths”, a doped-out stab at slacker hip-hop reminiscent of early Beck and Pavement.

As such, Tally, while fun and digestible, also sends some mixed signals. How close they end up sticking to their arty, lo-fi roots remains to be seen, but at least the record gives some indication they’re not above fleshing out their musical worldview.

Essential Tracks: “You’ve Got Me Wondering Now”, “He’ Seeing Paths”