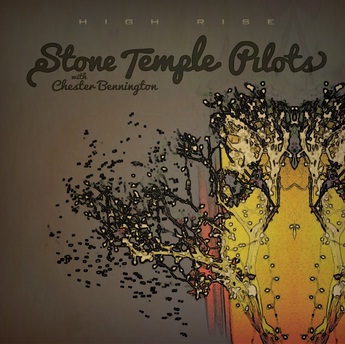 I was a huge Stone Temple Pilots fan growing up. I bought Core and Purple on cassette and would later be crushed by the void of “Big Empty” and the glam of “Big Bang Baby”. The definitive voice of STP will always be Scott Weiland, but much of the music and the hits are credited to the brothers DeLeo (bassist Robert and guitarist Dean). It is with the success achieved and with confidence in their songwriting that the DeLeos, along with founding drummer Eric Kretz, took ownership of Stone Temple Pilots (kind of) and forged ahead sans Weiland with their new EP, High Rise. Did I mention Linkin Park’s Chester Bennington is the new lead singer? Did I have to?

And therein lies the problem. In the eyes and ears of so many, High Rise fails before it ever streams. Weiland and STP go hand-in-hand in such a way it’s impossible to imagine the band without him (Weiland without the band is another story). Stone Temple Pilots with Chester Bennington won’t do anything to wipe clean the messy relationship/divorce between STP and their former frontman, but do the songs themselves hold up? The answer is sadly, albeit predictably, no.

At least Sammy Hagar sounded different from his predecessor. Simply put, new STP should have gone another direction for a vocalist. No doubt Bennington can give it his nu-metal yowl, but he apes Weiland as much as Journey’s current lead singer pays tribute to Steve Perry. Bennington attempts sleaze for the verses of “Out of Time” and “Black Heart” whereas Weiland would naturally exude it. Musically, the band still has muscle, as the DeLeos continue to find more inspiration in “classic rock” than “grunge” (see: “Cry Cry”), but alas and alack, Weiland’s wanted back.

Stone Temple Pilots with Chester Bennington is the new Queen with Paul Rodgers, and they’re just not half the band they used to be (couldn’t resist). Die-hard fans of Linkin Park will no doubt find reason to rejoice upon hearing Bennington, but the rest will be disappointed. High Rise is sobering proof that just while imitation is the sincerest form of flattery, it doesn’t necessarily mean it’s worth a damn.