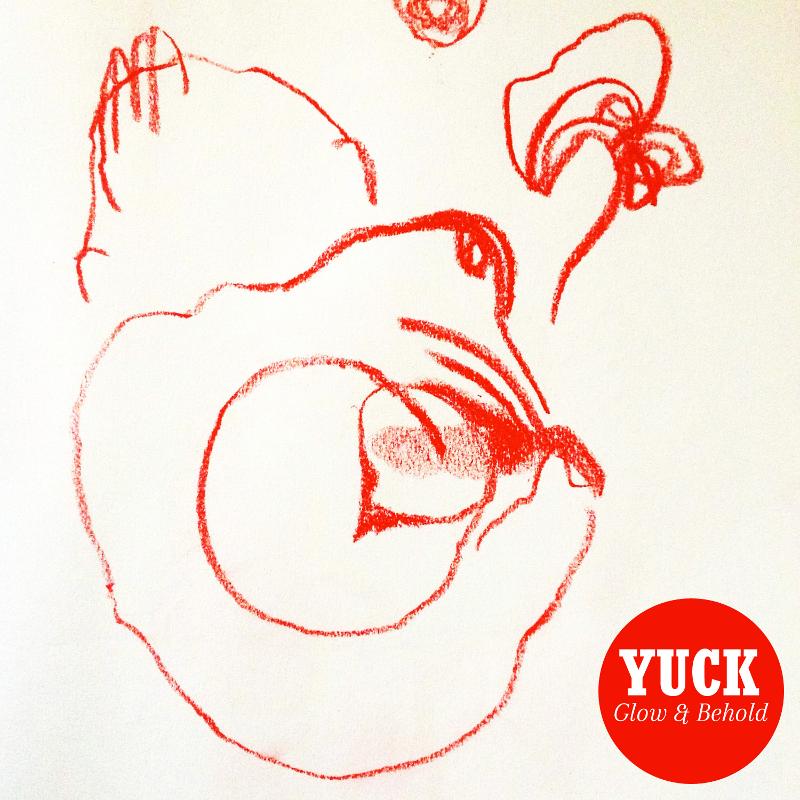 Bands are never the same after losing a frontman, their eventual return to the scene an anxiety-inducing ordeal for fans. While the experiment has its share of both successes and failures, Yuck started off a bit better than some bands, many of which lost not just a vocalist, but their songwriting tour-de-force. Yuck’s roots, instead, relied on teamwork, stemming equally from departed frontman Daniel Blumberg and guitarist/vocalist Max Bloom. Glow & Behold revisits their much-admired ’90s nostalgia, but it lacks the  ambition and aggressive nature that made their debut hauntingly memorable.

As evident in both the album art and the startling chord crunch of opener “Get Away”, their debut self-titled was purposefully nasty, maintaining a continuous positivity and momentum. On Glow & Behold, the appropriately-titled “Rebirth” takes elements of that design and expands into new territory, delving into shoegaze dimensions initially cued by Bloom’s sole lead on Yuck, “Operation”. Offering tribute to My Bloody Valentine, he narrates his challenges of being “dropped in a maze of hopeless abandon,” connecting to the real-life role he’s new to, that of executive frontman and songwriter. In accepting this challenge, “Rebirth” places guitar work on a higher pedestal and advocates speaker-blasting volumes, the song dressed in woozy chaos and Bloom’s strongest vocal performance to date.

Moving away from the four-track recorder used on Yuck, the band utilized studio time to redefine their projection. In successfully reproducing the Bloom/Blumberg guitar dialogue, producer Chris Coady also assisted Bloom is bringing more clarity and experimentation to their character. Bloom’s voice isn’t the most dominant force in the mix, but his soothing tones envelop harmonies and backgrounds that give depth to sullen moods, as on “Memorial Fields” and “Somewhere”. Yuck‘s “Suck” is a direct ancestor of “Memorial Fields”, yielding carbon-copies in guitar and vocal melodies, but the track’s expansive pallet of blaring horns and synth make such revisitation worthwhile. As the track dwindles into the final movements, they cleverly toy with vigorous synth scales and reversed guitar work to force attention back.

On the other hand, other revisitations lack animation and focus more on the struggle, only spending “seconds in the daylight” rather than escaping with playful instrumental encouragement. “Middle Sea” takes the repetitive verse-chorus arrangement and conversational vocals of “The Wall”, but fails to match Blumberg’s explosive screams and antagonistic snarls. The previous frontman also dedicated heart-felt murmurs when paired with backing vocals from his sister, Ilana Blumberg, suceeding with “Georgia” and “Stutter”. When Bloom and bassist Mariko Doi attempt to replicate the effect on “Out of Time”, it sounds forced. The lyrical inspiration follows the same pattern, losing touch of the foundation that was previously so strong.

Glow & Behold‘s first cuts lie under “maple shade,” a metaphor illustrating a place where Bloom discovers love and suppresses broken dreams. While this secret location is clearly special to the songwriter, its significance is ambiguous and begins to lose its meaning. They look for clarity in “Out of Time”, explaining that “I need you to tell me/ weaving in, weaving out,” but they neither receive an answer nor provide one themselves, an expectation set by Blumberg’s easily-digestable approach. After he moves away from the metaphor of the maple, the same mentality carries with lyrics like “move away across the ocean/ like a dream” and “how does it feel to rely on everyone/ like Jesus on the sun,” the responsibilities of the sole songwriter evidently stretched too thin, transparency falling through the cracks.

This focus also takes away from Bloom’s greatest talent, his triumphant lead guitar performance. In exchange for his electrified Fender Jaguar, his use of acoustic guitar instead highlighting his voice, reaching for support with extraneous layering. The rock-based foundation created on the first half of the disc completely fades into a forefront of softer songs that fail to utilize their full-band chemistry. The debut’s venomousness closer, “Rubber”, was an unexpected left hook, pushing their nastiness to a new high, but Glow & Behold‘s dull strums make for a questionable conclusion.

Aside from a few enticing revelations of Bloom’s potential, Glow & Behold takes the band to a calming low after too many safe turns, diminishing the exciting luster they once exuded. If the risk-taking ambition of “Rebirth” was expanded into an entire new outlook, Yuck’s sophomore release would have been much more memorable.