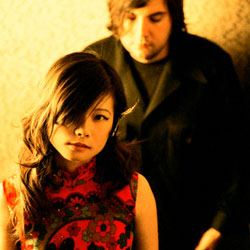 When we last heard from Asobi Seksu, they had released a stellar Record Store Day split single with Boris. Their cover of the Japanese sludge trio’s “Farewell” now feels like a hidden message, because earlier this week Asobi Seksu said goodbye with a series of social media updates announcing an indefinite hiatus. The story behind the departure is a mystery, only that they “love asobi 2. That’s why we had to let it go for now.”

Things aren’t entirely bleak for Asobi Seksu fans, however, with promises of future projects and that they “hope to make more down the line” and “may write for Asobi again in a couple years.” Regardless of what the future holds, the psychedelic trance popsters have given us a decade’s worth of material and live shows that unleashed an awe-inspiring, thunderous noise while still inciting jump and dance along moments. To pass the time until their return, here are Asobi Seksu’s most essential tracks.

The influence of shoegaze legends is undeniable on “Trails”, but what’s remarkable about the chaotic single is how Asobi Seksu spins those influences into something that’s their own. James Hanna’s guitar churn is counterbalanced by a post-punk groove, while Yuki Chikudate with the assuredness with an assured otherworldliness that’s more Kate Bush than Liz Fraser, and the result is too catchy to resist.

“Breathe into Glass” first appeared as a B-side to “Me & Mary”, contrasting the single’s catchy, raucous noise with a glacial exquisiteness that stood in defiance of shoegaze pigeonholing. An even more delicate version opens Rewolf, Asobi Seksu’s album of acoustic reworkings, with an ethereal magnificence that allows Chikudate’s sweet intonations to soar sky-high, untethered by layers of reverb.

Bittersweetness is inexorably tied to Asobi Seksu thanks to numbers such as “It’s Too Late”. Starting as a plaintive ballad, the grief behind Chikudate’s candied lament gives way to an anger that cascades into a psychedelic flurry of wailing guitar. The song’s immense, raw guitar textures may have also guaranteed years of comparisons to My Bloody Valentine, but the result was worth it.

Admittedly, I still haven’t a clue what exactly “Candy says” on “New Years”, but I don’t need one. Sure, it always pays to be bilingual, but a grasp of the Japanese language isn’t necessary to hum and groove along to the irresistibility of Asobi Seksu’s punchy pop.

Speaking of bittersweet, how about that song title? Rather than opening with a calm before the storm that soon follows, Asobi Seksu’s self-titled debut begins with a pop ditty that’s as playful as the first half of the band’s moniker. Here, Chikudate hoots in Japanese atop fast-paced keys between punctuations of noisegasms for three minutes of ferocious pop.

On the never-slow, but always burning “Red Sea”, Asobi Seksu flaunts their signature dichotomy between pop and noise across eight thrilling minutes. For the song’s live performances, the band would depart the stage amid an onslaught of screeching effects while Chikudate retreated to the drum kit for a furious headbanger of an extended finale.

Asobi Seksu offers one of their clearest views at what lies behind that wall of reverb on this Hush standout. For this mellow strummer, Hanna joins Chikudate for a vocal back-and-forth across a lush, synth soundscape that is increasingly marked by understated guitar textures until culminating in a swirling finish that directly leads into the noisier “Me & Mary”. A bittersweet ballad, “I Can’t See” is everything that made Asobi Seksu truly great and more than yet another group of Kevin Shields disciples.

3. “Leave the Drummer Out There”

Throughout their existence, Asobi Seksu has changed rhythm sections with an almost Spın̈al Tap frequency. The band’s final, and longest-lasting, drummer was Larry Gorman, formerly of Glassjaw Orange 9mm, who brought a level of punk rock intensity to their live shows. On this Fluorescence centerpiece, Gorman hammers out a militaristic rhythm that transforms a lullaby of soprano coos and echo-laden synths marches into a nearly seven minute epic. “Leave the Drummer Out There” is a march that other dream pop bands could never hope to outpace.

Saying goodbye is hard, so why not make it count? Is it better for a date to close with a quick kiss and wave or an extended makeout session? Or even better, some “playful sex?” Midway through their career, Asobi Seksu mastered the art of crafting finales as grand in sound as they are extensive in length with “Stay Awake”. Released in 2007 as part of a series of limited edition singles for Gigantic Music, “Stay Awake” finds the band dropping Shields for Spector. Beginning as an ethereal AM pop ballad, “Stay Awake” transforms its girl group vibe into a expansive detonation of space rock that threatens to consume all in a storm of stunning beauty.

The hiatus of Asobi Seksu stings, and with sharpened tongue, I cry out for them. Everything will be okay, though, according to the assurance of “Thursday”. As citrusy as the album’s namesake, “Thursday’s” heartbreaking lyrics of longing for a love lost become an ode of triumph thanks to their poppy delivery and perfectly arranged dream pop accompaniment of strings and swirls. There could not be a more appropriate song to soundtrack life following the band’s departure.