Desaparecidos, The So So Glos annihilate Chicago’s Metro (10/25) 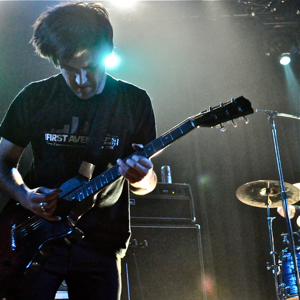 Does Conor Oberst always fall on his ass? I’ve seen him three times now–twice with Bright Eyes in the early aughts and last night’s Desaparecidos show at Chicago’s Metro–and at every one he’s taken an honest-to-god tumble. It could be the alcohol (both Bright Eyes shows I saw found the singer hilariously inebriated), but nah, Oberst just knows how to rock. Yeah, this is the guy who wrote “Kathy With a K’s Song”, but it’s also the guy who formed Desaparecidos, whose thundering, combative music feels, in many ways, better suited to the singer’s performative aesthetic.

Oberst, along with Desaparecidos’ original lineup, thrashed their way through 16 songs that encompassed 2002’s Read Music/Speak Spanish, its accompanying EP The Happiest Place on Earth, and a slew of new, politically-charged tracks that have been surfacing online over the past year. Of those, “Anonymous” and “Marikkkopa” rock the hardest, Oberst’s voice taking on the kind of ragged, hoarse quality he could never quite reach on his earlier records, where its cracks and shudders could overwhelm its authenticity. Read Music/Speak Spanish standouts “Mañana” and “The Happiest Place on Earth” held up, both in performance and content, as did “Man and Wife, The Former (Financial Planning)”, whose furious, driving verses are some of the most enthralling I’ve seen onstage all year.

For better or worse, Oberst’s political commentary, intrinsic to his live shows, remains. Sometimes it informs the songs, such as when he called out “Marikkkopa”’s inspiration, racist Arizona Sheriff Joe Arpaio, or when he attacked “make-believe progressives [and] make-believe liberals [that] suck on the corporate teat.” Where Oberst seems less than comfortable is in revisiting the Read Music/Speak Spanish tracks that concern capitalism and financial inequality, such as the “Man and Wife” songs and “Mall of America”. Before these songs, Oberst seemed to parody his own success, saying they don’t really apply to him anymore and offering dedications “to all the dope t-shirts we have for sale at Hot Topic.” There’s something to be said for the acknowledgement, but acknowledgement doesn’t necessarily absolve. It’s a fine line for Oberst to navigate, but such are the perils of being a successful anti-capitalist artist.

Brooklyn’s The So So Glos, noted for their DIY tendencies, made for a fitting opener, their hyperactive punk and amiable presence evoking a more wholesome version of snot rockers Fidlar and Diarrhea Planet. Singer Alex Levine deftly rallied the burgeoning crowd with handclaps, “ohs”, and “whoas” as standouts “House of Glass” and “Throw Your Hands up” conjured just as many bounce-offs as circle pits. Props also to “Xanax”, a standout track from this year’s Blowout that samples the Parenthetical Girls, one of the most underrated bands in indie rock.

The packed, frothing-at-the-mouth house was something of a surprise, considering Desaparecidos has just one LP to their name. My girlfriend, in squeezing her way to the photo pit, was both choked and punched by girls who thought she was trying to usurp their spot. But such is the power of Oberst, a man whose fans bear a certain kind of terrifying fervor. No matter how heavy his music gets, how pointed his message becomes, he’ll always be our Conor.

Setlist:
The Left is Right
Backsell
The Mall of America
The Happiest Place on Earth
Mañana
Man and Wife, The Former (Financial Planning)
The Underground Man
Marikkkopa
Man and Wife, The Latter (Damaged Goods)
Te Amo Camilia Vallejo
$$$$
Survival of the Fittest / It’s a Jungle Out There
Greater Omaha
Encore:
Anonymous
Spanish Bombs (The Clash cover)
Hole in One