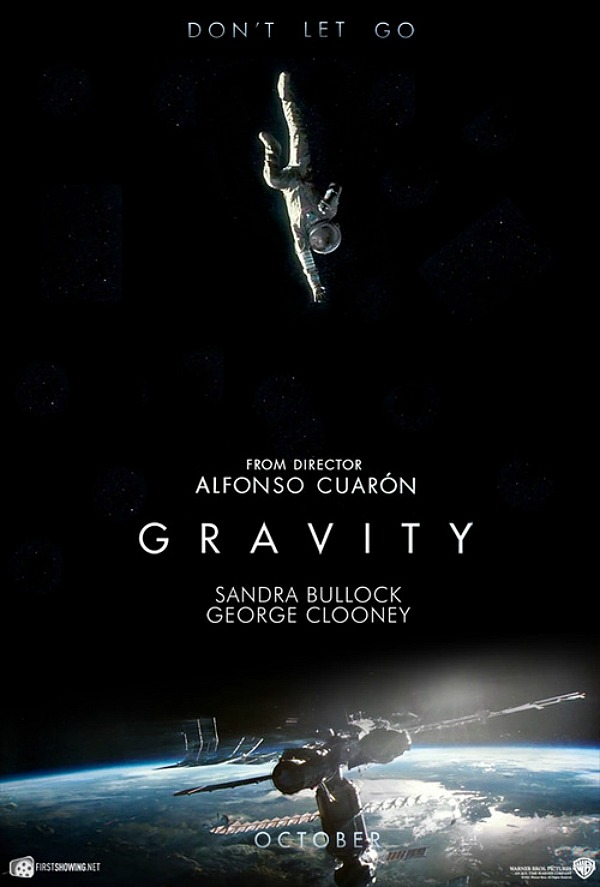 “Look again at that dot. That’s here. That’s home. That’s us. On it everyone you love, everyone you know, everyone you ever heard of, every human being who ever was, lived out their lives…on a mote of dust suspended in a sunbeam.” – Carl Sagan

While Sagan was speaking of planet Earth as seen from billions of miles away, Alfonso Cuaron’s Gravity offers Earth as seen precariously close, through the perspective of two human beings rotating around it at terrifying speeds. Ryan Stone (Sandra Bullock) and Matt Kowalski (George Clooney) have homes somewhere on there; Stone mentions early in the film that she hails from Lake Zurich, IL. And rotating far above the earth, tethered to a piece of machinery that marginally isolates her from the endless, vast nothingness of space, a vacuum so expansive that eventually her hometown and everyone else’s can be reduced to Sagan’s mote of dust, Stone tries to fix a computer so that humanity can continue to entertain the delusion that space can be expanded into and tamed.

Gravity, in short, is a film about what happens when two human beings become acutely aware of just how small they are in the universe. And it is the finest film of 2013 so far, the kind of cinema that technology is able to produce maybe two or three times every generation. The full dream of the earliest films comes closer to realization here than it has in some time, the dream of creating entire tangible worlds that would be otherwise impossible. And yet the world Cuaron creates so masterfully isn’t impossible; far from it. It exists hovering beyond myself as I write this and you as you read it, dangling by a thread strung between meticulously prepared safety measures. Gravity takes place in and around various machines, and once the U.S.’ is decimated in a stunning 14-minute single-take opening sequence, Ryan and Matt are forced into a drift. Tethered to one another, they have none of the reassurance of NASA-made protection, only their intelligence and one another as they orbit the Earth in what looks like a ballet-like float and is actually closer to an endless freefall.

While Clooney gets to play the standard Clooney type, all bravado and smiling humor and innate dignity, this is largely Bullock’s film. For all the technical marvels that Gravity offers, and there are many, Ryan is the film’s emotional core, her current wave of trauma resurrecting memories of past ones, initially left childlike in the face of nearly certain death before finding her resolve. As they fly through space, barely in control of their own trajectory, Matt teaches Ryan that “You have to learn to let go,” which proves essential in many different ways as the film progresses. There’s a lot of letting go in Gravity, both metaphorical and literal, and it’s a testament to how great a film this is that the former doesn’t interfere with the film in the slightest. Some of Gravity works in platitudes, but in a way that lends it a universal resonance. To demand that characters in a panicked situation be capable of nuanced dialogue is to define the concept of nitpicking, and Gravity is frequently more a film about tactile, visceral fear than it is about contemplation of the universe.

At the same time, the film gives viewers plenty of openings to do so. Cuaron’s majestic, free-floating camera work (innovated in tandem with longtime collaborator Emmanuel Lubezki) captures both the indescribable beauty and total isolation of space, often simultaneously. (This works in tandem with the story, where Matt and Ryan appreciate those respective aspects of orbit.) When debris flies through the air, there’s scale and distance to it; rather than utilizing the film’s impeccable 3D as a free pass to have debris fly into the audience’s faces, Cuaron builds endless layers of scale, in which the barely visible dots floating off in the distance often hold just as much or even more weight than the silent explosions happening front and center. For all its pageantry, though,Gravity is above all a film about the undying resilience of humankind, set against the immense and the immovable. And it is the kind of film that builds dreams, that sets itself at the gateway of where Earth stops being a home planet and starts getting smaller and smaller in the universe. And it is a minor miracle of the imagination.