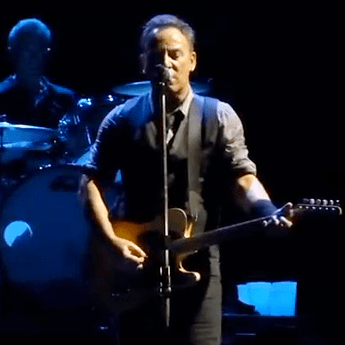 Fact: Bruce Springsteen is a longtime fan of New York’s cult electro-punk duo Suicide. Nebraska’s “State Trooper” owes plenty to the group, and in 2005, The Boss even closed his Devils and Dust shows with a cover of “Dream Baby Dream”. Now that he’s wrapped up his Wrecking Ball world tour, he’s waxing nostalgic over his love for the group… and his fans.

“To all the tramps and travelers who exposed themselves night after night to the long flights, the long drives, the long queuing, the rain, the sleeplessness in order to fuel us from band center, we appreciate it,” the great New Jersey bard writes in a new letter, which goes on to make all of his friends, family, and fans feel like a million bucks.

To top it all off, he’s uploaded a newly recorded version of Suicide’s “Dream Baby Dream” that soundtracks a video of fans losing their minds at his shows. It’s pretty emotional stuff, especially if you’ve ever experienced that religious Bruce moment for yourself.

Read the letter here, and watch the video below.

Previous Story
Ylvis and The Roots performed “The Fox” on Fallon, it was everything we wanted it to be
Next Story
Austin City Limits 2013 webcast schedule revealed
Popular
More Stories
[fu-upload-form form_layout="media" title="Submit Your Photo"][input type="hidden" name="ugc" value="1"][/fu-upload-form]