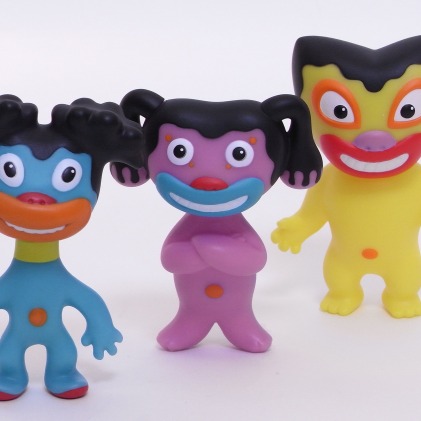 As previously reported, Yo La Tengo are issuing a new 7″ single featuring the Fade outtake “Super Kiwi”. Keeping with the album’s more raucous first half, it’s a fuzzy blast of hyperactive pop-punk bound to shake up this sleepy Friday afternoon. Listen in below.

“Super Kiwi” b/w a cover of The Beach Boys’ “A Day in the Life of a Tree” is due out November 5th via Matador, and how bout that artwork? Both tracks will also be included on the Fade deluxe edition, due out November 19th.

Also forthcoming: Yo La Tengo’s Ira Kaplan, Georgia Hubley, and James McNew re-imagined as a three-piece soft-vinyl doll set. Created by Japanese sculptor Tomohiro Yasui, the figurines come accompanied by an animated short film, which features new music from the band. The set is available through Matador’s website, or at the merch table during their upcoming European tour.

Here’s the full description, via Matablog:

Experience the magical collaboration of Yo La Tengo and Jim Woodring.
The three band members, Ira, Georgia and James come to life as 3 original characters in the land of “the Tree!”

Present/past/future, the real/unreal, visible/invisible, sadness/joy……”the Tree” will grow, enveloping all. And the ecstatic creatures that inhabit “the Tree” are the 3 beings blessed by the god of music. The curtain has been raised for Woodring’s mysterious and psychedelic dream land. But the story has just begun……

This product is a set of DVD and 3 soft-vinyl dolls. The DVD contains an original animation (5:20 minutes) of a mind-blowing colorful dream world that centers on “the Tree” and the 3 whimsical characters. It is made by a Japanese production company that specialize in hand-drawn animation: drop. And of course, All NEW music by Yo La Tengo! The 3 colorful soft-vinyl dolls were sculpted by Japanese master sculptor: Tomohiro Yasui. Beautiful packaging design by Jim Woodring with a bonus comic on the back.

And here’s an audio-less commercial: