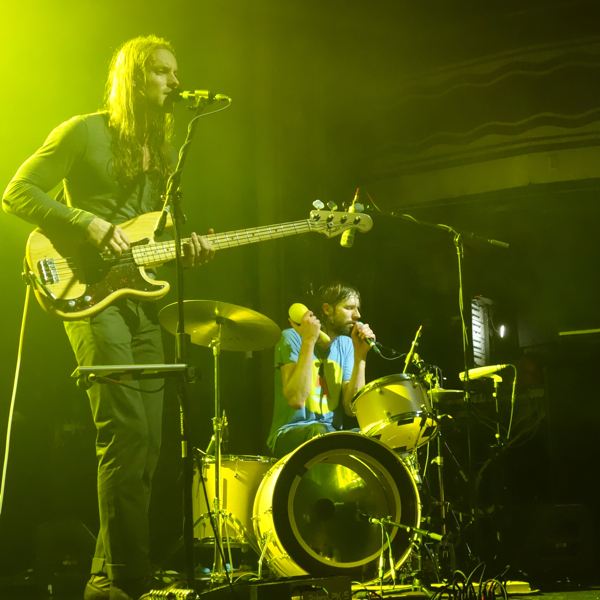 Just over a year after releasing Moms — a break away from founding member Brent Knopf and towards more nakedly personal lyrical concerns — Portland’s Menomena is still touring behind the LP. Which maybe makes sense: Moms was excellent, even revelatory in parts, and yet they still haven’t recaptured the critical shine that surrounded 2007’s Friend & Foe. So they teamed up with Pattern Is Movement and The Helio Sequence and, in the midst of CMJ fervor, landed at New York’s Webster Hall on Thursday night for an early show.

In July, we stressed the latter acts’ similarities — both formed in Beaverton, OR, and are known for their “self-produced, inventive music. But at Webster, the two felt more different than alike: a duo. The Helio Sequence delivered a set of airy, expansive indie rock, floating along on Brandon Summers’ vocals and Benjamin Weikel’s washed out, ’80s-styled drumming, with generous accompaniment from prerecorded bass and keyboard parts. Though enjoyable, the tracks bled together in a soupy blur, echoing around the cavernous, half-empty ballroom. (That’s a function of the early set times, not crowd disinterest.) Menomena’s set, by contrast, was full of sharp instrumental turns and bracing dynamics — without a trace of backing tracks.

Below, four thoughts about Menomena — with elaborations — stemming from their mostly excellent performance Thursday night.

Here is the most remarkable thing about Menomena’s live show: they don’t dumb them down. I am talking about the kaleidoscope arrangements, those aggressively shape-shifting pop songs the group constructs in the studio with the help of Deeler, their own looping program. You know those rapid-fire sampler lines, those confounding rhythmic breaks, those bits where every element explodes according to its own melodic logic? They managed all that — without the aid of backing tracks, and with only two touring instrumentalists performing alongside core members Danny Seim and Justin Harris. (Brent Knopf exited the band in 2011; he was replaced on tour in 2012 with cartoonishly energized keyboardist Paul Alcott, but Alcott was nowhere to be found last night, either.) Harris, an impressive multi-instrumentalist, traded off between guitar, bass, and baritone saxophone.

Moms, to its credit, dials down some of those fragmented arrangements — which worked better on 2007’s Friend & Foe than on its follow-up, Mines — in favor of driving, emotionally direct tracks like “Plummage” and “Capsule”. Both made for highlights last night. Moms alternates deliberately between Seim’s and Harris’s tracks — each plumbing the drama of familial strife — but onstage, the two are a fiercely collaborative unit: “Plummage”, a Harris track, was undergirded by Seim’s pounding drums while “Capsule”, a Seim song, coaxed some of Harris’s fiercest noise guitar.

I miss Brent, but mostly I just miss Brent’s songs. Knopf’s voice was a fine addition to the band — high, searching, earnest but never whiny. Moms, mostly, was strong enough not to notice (or at least not to dwell on) his absence. But Knopf contributed some of the group’s most fluid, sweetly melodic material — “Wet and Rusting”, “INTIL”, and “Killemall”, to rattle off several treasures — and, without him, Mines felt particularly misrepresented. The band surged through the plodding, stiffly half-time “Five Little Rooms” and the disjointed rocker “TAOS” (there’s a midsection that deserves a far better song to surround it), but both felt like an empty reminder of just what was so excellent about Knopf’s songwriting to begin with.

Is Danny Seim indie-rock’s heir apparent to Steven Drozd? Steven Drozd is — was? — the Bonham-eyed drumming powerhouse for the Flaming Lips; that’s him blowing speakers on “Slow Nerve Action” and “March of the Rotten Vegetable”. Since the 2000s, he’s let Kliph Scurlock take over percussive duties to focus on multi-instrumentalist bliss — leaving the mantle to Seim, whose immensely powerful, pounding drum work makes him a natural successor to the throne. On record, his talent impresses; in concert, it overwhelms.

And it wasn’t just the force with which he played (though it’s that, too), dark matted hair strung wildly around his eyes; it was also the drum sound he’s able to get: the booming, airy bass drum and distorted snare. At Webster, Menomena sounded like a rock band as much as they did a crew of over-clever indie nerds, and that was largely thanks to Seim’s percussive work, which energized rockers like “The Pelican” and relative oldie “Strongest Man in the World” into pummeling overdrive. Seim’s force, coupled with ringing chords from touring guitarist Matt Dabrowiak, made “Don’t Mess with Latexas” into an unlikely highlight as well. That he pulls a Peter Gabriel, too — adequately handling vocals on about half the tracks while drumming — is only more striking.

There is something to be said for not saying anything at all between songs. At one point, Seim jokingly shouted out “South by Southwest!”; at another, he cordially thanked The Helio Sequence and his audience, but that was really it in terms of stage banter. And, in the context of so many bands, this move can come across as self-important or dour. At this show, it seemed to ring a far simpler message: “We have so much music to play, and let’s just get to it.”

Previous Story
Here’s the setlist for Drake’s “Would You Like a Tour?”
Next Story
Watch footage from Prince’s Pajama Party, where pancakes were in fact served
Popular
More Stories
[fu-upload-form form_layout="media" title="Submit Your Photo"][input type="hidden" name="ugc" value="1"][/fu-upload-form]