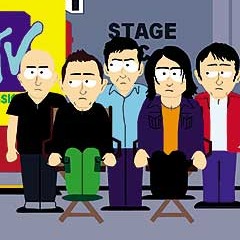 Dug up from South Park‘s dusty, decades-old archives is this piece of awesomeness: an original Radiohead design from when the band appeared on the show back in 2001. If you recall, they made a cameo in the vicious, absolutely classic episode, “Scott Tenorman Must Die”, in which a very vindictive Cartman creates an elaborate scheme to have the band mock the bullying asshole, Scott Tenorman. Even though Thom Yorke’s got some A+ quotes under his belt (not to mention music and dance moves), I’m kind of tempted to just start calling him “Lead Guy”… what do you think?

Below, watch a clip of their South Park cameo: