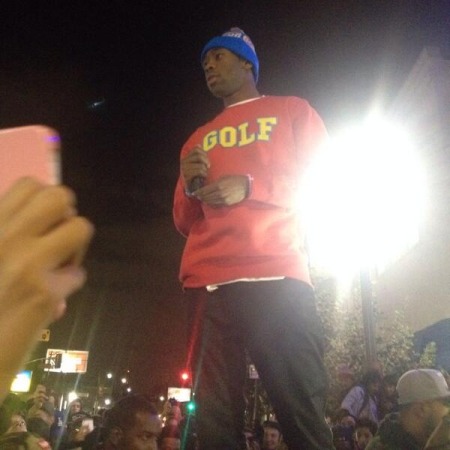 Last week, Tyler, the Creator and Flying Lotus were due to perform at Los Angeles’ Low End Theory, a tiny nightclub with a capacity of just 140. According to CBS Los Angeles, riot police were called after the crowd outside the venue became unruly and began throwing rocks and bottles.

Now, via Reddit, video has surfaced of Tyler attempting to calm down the crowd outside the venue and, in the process, curse out police officers to their face. “Listen, I’m sorry all you guys could not get in, but you already know how Los Angeles cops are, they’re assholes,” Tyler said into a microphone before an officer’s attempt to take it from him. While Tyler eventually got back on the mic, he was unable to defuse tension, and the show was ultimately canceled.