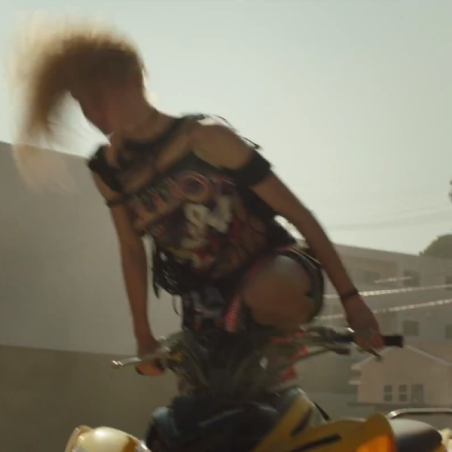 In past music videos, Angel Haze has tormented small children and gotten all of New York dancing. In the video for “Echelon (It’s My Way)”, the lead single off her major label debut Dirty Gold, hip-hop’s bright young hope spends the afternoon with a biker gang. Only these aren’t your traditional Hells Angels, but rather a group of brightly-colored misfits who ride around on four-wheelers and include Dog the Bounty Hunter and Brooke Candy as members. Watch below.

Recorded in Spain, London, and Los Angeles, with production by Markus Dravs (Coldplay, Arcade Fire), Dirty Gold is set for release later this year on Universal Republic. For more sounds, check out the non-album single “No Bueno”, the outtake “Initiation”, and the monstrous “A Tribe Called Red”. Haze also went all kinds of HAM on Kanye West’s “New Slaves”.