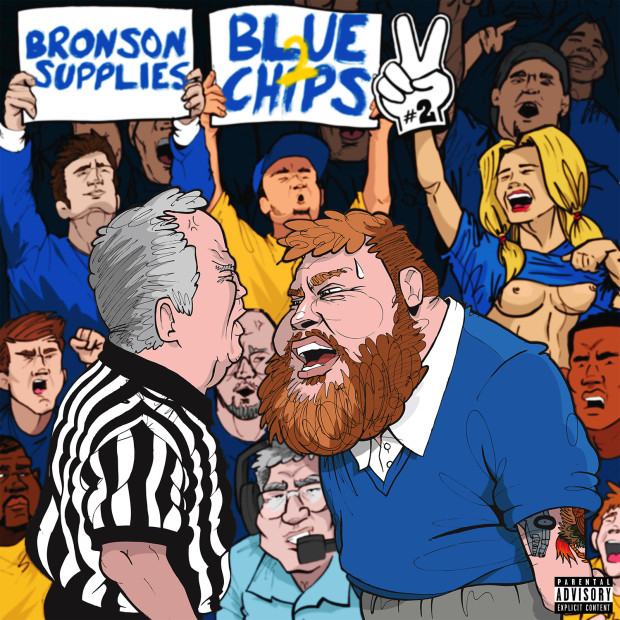 Terminator 2, Hot Shots! Part Deux, Aliens, The Godfather Part II, Blue Chips 2 – sequels to amazing projects that somehow better their predecessor and expand the original concept into realms unexplored. Reuniting for the followup to their 2012 mixtape Blue Chips, Queens rapper Action Bronson and producer Party Supplies reinvent the wheel and improve on their original design in more ways than one. Potentially the most ambitious use of samples in years paired with Bronsoliño’s special brand of gourmet lyricism yields some of the most tripped-out rap of 2013. The entire album is an exercise in versatility, as both rapper and producer have honed their craft with other efforts in between installments of what will hopefully become a multi-volume saga.

Party Supplies, born Justin Nealis, has crafted something special by reaching far and wide for samples and putting together the most majestic Frankenstein, complete with a Jason Sudeikis Applebee’s commercial, Samuel L. Jackson robbing the McDowell’s in Coming to America, and Tracy Chapman’s “Give Me One Reason”, among many others. Having put out his solo debut Tough Love in August, an exploration into electro, R&B, and rock, Party Supplies digs deep here and shows off his malleable production style with a mixture of deep-cut samples and his own beats. In an interview with Pigeons & Planes, Nealis voiced a lack of interest in working with other rappers besides Bronson, and it’s easy to see why, as the two have tapped into something special. The producer/MC combo isn’t terribly common in hip-hop anymore, and these two are staking their claim as the kings of that arena with their second effort.

Now more than ever, Bronson’s name-checking of famous wrestlers is an appropriate tool to employ. The guy is a heavyweight himself, having made the transition from a 300-plus-pound professional chef to one of the hottest names in rap in three years. He ditches all humility in his rhymes and lets his ego absolutely wild out on the 19-track tape. “Rolling Thunder” finds his “one-man team about to win the pennant” just bars after referencing Dennis the Menace and Dennis Rodman. In his own recent interview with Pigeons & Planes, Bronson spoke on the delicate balance between being an artist and a father, admirably declaring, “It’s all about the kids, I do this shit for my children. It didn’t start off like that, but shit, I’m making money off of it and that’s definitely what it’s about.” It’s evident all over this album that Bronson is stepping his game up, evolving as a musician and a man with every release.

Full of (literal) highs and so few lows, the album’s flow is only occasionally interrupted by commercials, some of which will inevitably be skipped over in the future. Phil Mickelson talking about his debilitating joint pain at the end of the tropical “It’s Me” is so out of place, but somehow feels right coming at the end of Bronson’s jaunty rap about hiding drugs on his person and doing squats (yep) to get them out. These less musical moments don’t distract too much from the quality of the mixtape because they’re usually just as entertaining. A case could be made for an entire album of Bronson’s cousin Big Body Bes just talking to no one in particular, his patois doing his borough proud. It’s an aesthetic choice that pays off enormously in making a case for Bronson as one of the undisputed pillars of NYC rap culture: the quick-shot samples like overheard street conversations, the enigmatic array of musical backgrounds over which he spits his golden bars, the wealth of references with which Bronson crafts his sonic gumbo. I mean, I really can’t tell you how long I’ve been waiting for someone to work MLB journeyman Plácido Polanco into their rhymes. So many retro sports name drops mixed with verbal food porn that it seems like Bronson writes his songs while watching ESPN Classic in the kitchen.

“Contemporary Man” is by far the standout track, Party Supplies fully displaying his sampling skills while Bronson proves that he can rap over literally anything. Peter Gabriel’s “Sledgehammer”, Phil Collins’ “Sussudio” and “Another Day in Paradise”, John Mellencamp’s “Jack and Diane”, and Lisa Lisa & Cult Jam’s “I Wonder if I Take You Home” share the track with Charlie Sheen bragging about banging seven-gram rocks and Bronson bragging about how his joints cost a clean hundred, his pee-pee’s ability to make you poo-poo, and the fact that somehow, after all of that, he’s still invited to the Tony Awards. Two previously released songs found their way onto Blue Chips 2: the low-key “Midget Cough” sporting a lax bass line and a Jim Abbott name-drop, and “Twin Peugots”, originally on the scattershot Fool’s Gold mix Loosies, now repurposed with a shiny Mac Miller feature (in addition to Big Body Bes, who was on the original) in which Mac offers a confessional about his bumpy ride to fame. The mini-sequel inside the larger sequel, “9.24.13”, finds Bronson in a much better mood than he was two years earlier when recording “9-24-11”, and what has become a staple of his raps, a line flub or repetition that gives him a few seconds to stop and take a hit at a live show. In this case it’s one of the better images to come from the entire album, in which the big man tells his driver to take him to the garden so he can “motivate” Patrick Ewing to miss a crucial finger roll in the 1995 Eastern Conference semifinals by offering him a choice between cash and a gat.

For a guy who’s constantly high on wax, Action Bronson moves with the best of them on Blue Chips 2 (yeah, time to put a moratorium on the Ghostface comparisons), able to maintain his increasingly unique flow over any track put in front of him. Party Supplies and Action Bronson are two for two, entirely earning all the praise sure to follow this impressive release, and make a case for the title of best duo in the rap game (watch out Run the Jewels). Bronson wears a lot of different masks over the course of the tape, playing the part of a wrestler reaching for the belt, a comic book villain surveying his empire, and mobster and literal game-changer Mr. Baklava, but never abandoning the real Bronson, the one who’s a great rapper. As the music fades out on album closer “I Adore You”, Bronson pleads with the girl that the song is aimed at, imploring her, “Standby/ Please, don’t go.” I can’t attest to how the recipient of that request felt about it, but you’ll want to stick around for whatever Action Bronson will do next.